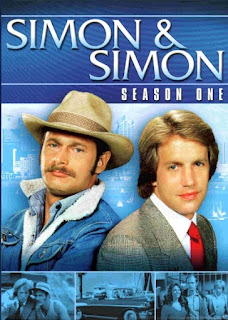 Simon & Simon is a quirky private eye series that premiered on CBS in 1981. Its roots however go back further than that. The original pilot, Pirate’s Key, went to air in 1978. It was set in Florida. When the series was finally given the green light the setting was changed to San Diego. Apparently the pilot also has a very different kind of tone.

Simon & Simon was an immediate ratings disaster and after a single 13-episode season was on the verge of cancellation. It was saved by a change of time slot. A very clever change of time slot - it now followed the established private eye hit Magnum, P.I. and to cement the relationship in viewers’ minds a crossover episode was made. Simon & Simon now became a major hit (and Magnum, P.I.’s ratings were boosted as well).

There’s some similarity in tone between the two series. Both are slightly offbeat and both rely quite a bit on charm, style and wit. Magnum, P.I. skilfully combines these elements this with some occasional very dark subject matter. Simon & Simon is more consistently light-hearted but the idea that Magnum, P.I. fans would probably enjoy Simon & Simon was a pretty sound one.

Their relationship with Myron Fowler is uneasy to say the least but this is basically a lighthearted series so that aspect is mostly played in a humorous way. Rick and A.J. do get along very well with Myron’s daughter Janet (Jeannie Wilson). She’s a lawyer and she helps them out a lot, much to Myron’s disgust.

The brothers (in the finest television tradition) make an ill-matched pair. A.J. looks like he could be an accountant and he has the sense of responsibility and the work ethic to match. Everything about him screams middle class. He dresses neat. He wears nice suits. He drives a 1957 Chevrolet Bel Air convertible. He’s a bit of a yuppie. Rick by contrast is a good ole boy. While A.J. does the paperwork he watches sports on TV and drinks beer. He wears jeans. He looks disreputable and he’s totally irresponsible. He drives a pick-up truck. 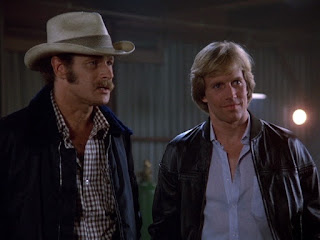 Rick and A.J. squabble constantly but in fact they’re very close. It’s not just brotherly affection. Despite their differences they like one another. And they work together as a team because they trust each other. It’s a classic Odd Couple setup but it works because Gerald McRaney (as Rick) and Jameson Parker (as A.J.) have genuine charm and the scripts make the most of their relationship.

It was a series that had enormous potential. There have been plenty of series with enormous potential that were cancelled after a single season because in those days the networks had no patience with any series that was not an immediate hit. Simon & Simon just got very very lucky. It was given the opportunity to survive and viewers came to love the show enough to keep it going for eight seasons.

While Magnum, P.I. remains the great American private eye series of the 80s Simon & Simon runs it a pretty close second. Both series have a slightly offbeat feel but each has its own distinctive flavour. Thomas Magnum is the ultimate glamorous private eye even if his glamour is borrowed (he lives in a mansion he doesn’t own and drives a Ferrari he doesn’t own). He’s impossibly good-looking and sexy. The Simon brothers are totally unglamorous. They’re the kinds of guys nobody ever notices. They’re just ordinary.

No matter how appealing your lead characters might be you still need stories that will persuade people to start watching and keep them watching until the closing credits. The first season scripts consistently do this. There are always a few nice unexpected touches. Some of the stories are outrageous, but they never become merely silly.

I should also mention the great opening titles sequence and the opening theme tune, both of which were unfortunately changed to something more conventional for the second season.

In Details at Eleven the brothers have to find a missing girl but finding her is just the start of their troubles. It’s what she’s running away from that matters. There’s a whole world of corruption to deal with. Political corruption and media corruption. Corrupt people who are very dangerous. They play for keeps. 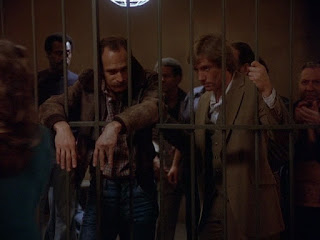 In Love, Christy Rick is overjoyed when blonde bombshell college student Christy hires the brothers to get her stolen car back. Unfortunately Christy is the kind of blonde who gives blondes a bad name. She’s spoilt and rich and doesn’t care about her car. What she cares about is the biology test paper that’s in the car, the test paper she stole (Christy doesn’t see why she should have to study for tests because after all she’s blonde and rich). Getting the car back gets Rick and A.J. into all sorts of trouble with some very nasty criminal elements. Untrustworthy clients getting private eyes into trouble were a staple of private eye series but this episode handles the theme pretty well. It’s light-hearted fun and it works.

Trapdoors deals with computer crime, a new and exciting subject in 1981. A 13-year-old has hacked into the local bank’s computer. The kid, Terry, has an awesome computer setup in his bedroom. He has a dial-up connection. A real dial-up connection - you have to dial the number by hand on a telephone handset. There was no internet to connect to. Even bulletin board services were in their infancy. And he has a tape drive! If you’re of a certain age you’ll get a nostalgia blast from this episode. Terry hasn’t exactly been robbing the bank - he’s been borrowing money from other people’s accounts and collecting the interest. The bank hires the Simon brothers to catch the kid but of course the story is not as straightforward as it seems. As well as early 80s computers the story also involves role-playing games so there’s even more 80s nostalgia. And it’s a great story.

In A Recipe for Disaster a woman hires the Simon brothers when she thinks her estranged husband has kidnapped their daughter. But that’s not what happened at all. Sure Steve Gaines has his daughter with him down in Mexico where’s he’s working on an oil field. In fact Gaines in in trouble. A lot more people could be in trouble. A whole town full of people. It’s all to do with oil and money. Rick and A.J. will have to try to get both Gaines and his daughter out of that trouble. Lots of action in this one, and suspense, and humour as well (as the kid slowly drives A.J. and Rick insane). Rick also has a new gadget to play with. He loves gadgets. A very enjoyable episode.

In The Least Dangerous Game Rick and A.J. are hired by the zoo. There was an unfortunate incident there. One of the lions ate one of the keepers. That’s not good publicity for the zoo so the brothers’ job is to preserve the zoo’s good name by smearing the character of the keeper. Nothing about this case adds up. The Simon brothers re more and more suspicious but the solution to the mystery is weirder than they could have imagined. And Rick almost gets eaten by a bear. The Simon & Simon is pretty well established by now - clever scripts like this one combining humour and mystery with a few offbeat touches. A fine episode. 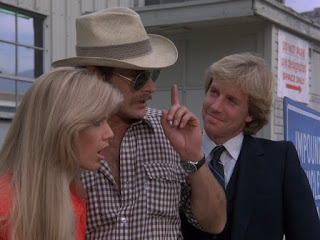 The Dead Letter File presents the Simon brothers with an opportunity to make a name for themselves. The only thing is, the murder took place in 1959. If there was a murder. The trouble with a 23-year-old murder case is that everyone involved is dead. Everybody except the murderer. The case involves tacos and burgers, and disc jockeys. It’s a typical episode, which means it’s clever and amusing and charming. It’s good stuff.

In The Hottest Ticket in Town the trouble starts when Rick and A.J. agree to try to get tickets for the sold-out Rick Brewster concert for their cousin Dianne. They manage to get hold of not the three tickers that she asked for but 8,000 tickets. They’ve stumbled on a racket. They try to do the right thing but people keep misunderstanding their intentions and pointing guns at them and hitting them. It’s a fun and original kind of episode, the kind of slightly offbeat thing this series did so well. John Travolta’s older brother Joey plays rock star Rick Brewster.

Ashes to Ashes, and None Too Soon is a tangled tale of love and diamonds. The Simon brothers hate serving papers on people but private detectives have to eat. This time they have reason to doubt the identity of the man they served the papers on, and then there’s a corpse to deal with. And there’s a Fed to deal with as well. And a woman. Actually two women. It’s all delightfully complicated. A great episode.

The Uncivil Servant brings the brothers an unexpected and very reluctant client - Myron Fowler. There’s a serious security leak at the Peerless Detective Agency and it has to be investigated by an outsider. Nobody will talk. They’re all too scared. What kind of monster could reduce grown men to abject terror? Could it be the Mob? In fact it’s worse. It’s a man from the IRS. The IRS is no laughing matter but there is plenty of humour in this episode, much of it courtesy of Jerry Stiller as a discount furniture king who does his own TV commercials which are so awful that Rick just can’t stop watching them. It all turns out to be a tale of revenge long delayed. And it’s great fun.

In Earth to Stacey Rick thinks he’s been clever, poaching a client from right under Myron Fowler’s nose. But Stacey proves to be something of a nightmare client. She’s rich, spoilt and crazy. Her husband-to-be stood her up at the altar and she wants him found. Finding him is easy but after that things get complicated and Stacey gets crazier. It’s a typical Simon & Simon episode - clever and whimsical. 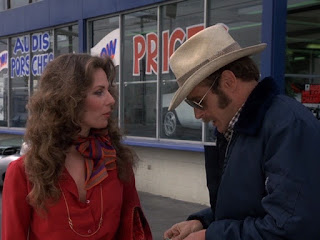 Double Entry starts with a very routine surveillance case. A woman thinks her husband is cheating on her. The surveillance reveals that something quite different is going on. Then the husband gets kidnapped. It’s a pretty solid episode with some amusing interplay between the brothers and their client who seems to be enjoying the whole thing way too much.

In Matchmaker Rick and A.J. are offered a case by Vicky Whittaker. Whittaker works for an insurance company which wants to buy back stolen antiques from a burglary gang. The brothers have worked for Whittaker before and they know she’s totally untrustworthy and would double-cross her own mother but the money on offer is good. The burglary racket is worked from a computerised dating service so A.J. will have to date lots of beautiful women in order to find the one behind the racket. Dating beautiful women in the line of duty is just one of those unpleasant jobs a private eye has to do. The brothers still have a bad feeling that Whittaker os going to land them in trouble, and she does. It’s an amusing little episode with everybody having problems with love.

In Tanks for the Memories the Simon brothers are hired by their old high school teacher to find a former classmate of theirs, and they find themselves plunged into a world of survivalists, mercenaries and crazies. They’ve also stumbled into the middle of an FBI investigation. Lance LeGault plays a totally crazed mercenary leader and as you’d expect he has a great time chewing the scenery. There’s even a bit of A-Team style action. A fun ending to the season.

The first season of Simon & Simon is an example of a great TV series which, given a chance, was always eventually going to build a big audience. Luckily it was, against the odds, given that chance. This first season is just amazingly charming and enjoyable. Highly recommended.
Posted by dfordoom at 00:45