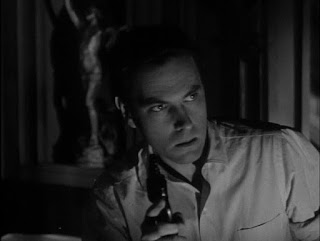 Thriller (AKA Boris Karloff Presents) screened on NBC from 1960 to 1962, was one of the legendary American anthology series of that era. What’s interesting about these series is that they all had their own distinctive flavours. Alfred Hitchcock Presents concentrated on crime stories with ironic stings in the tail. The Twilight Zone concentrated on unsettling stories of the weird and paranormal. The Outer Limits was science fiction generously laced with horror. Thriller started life as a mystery/suspense series in the Alfred Hitchcock Presents mould but quite early on the decision was made to move into overt horror but this was a gradual progression rather than a sudden change.

As a result of this what was great about Thriller was that you could never be quite sure if you were going to get supernatural horror or stories dealing purely with human evil. What makes the first season so interesting is that the early forays into horror are often stories that appear to be supernatural horror but turn out to have rational explanations but as the series progressed the supernatural starts to make its presence felt.

All of the American anthology series of that era have their strengths but Thriller had a visual style that was more flamboyant and more gothic than any of its rivals.

I’ve picked four episodes from the first half of the first season to talk about today.

The Purple Room (written and directed by Douglas Heyes) has a classic much-used setup for a haunted house story. Duncan Corey (Rip Torn) has inherited an old house called Black Oak from his brother. The house is in the middle of an area slated for redevelopment so in a couple of years it will be worth a fortune. Under the terms of the will Duncan cannot sell the house until he has lived in it for one year, but he must make his decision as to whether he will live in it after spending just one night there.

If he decides not to live there the house will go to his cousin Rachel Judson (Patricia Barry) and her husband Oliver (Richard Anderson).

Duncan is both a cynic and a sceptic. He wants to sell that house and he is arrogant and selfish. 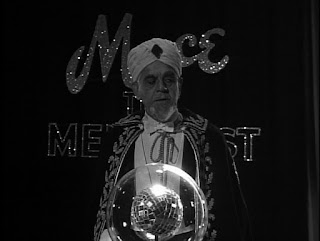 Rachel and Oliver meet him at the house and they seem to be pretty obviously trying to spook him, with tales of ghosts and mysterious deaths and other assorted horrors associated with the house. Duncan isn’t worried. He doesn’t believe in ghosts and he has a gun so he’s confident he can deal with any humans who might try any fake haunting nonsense. Duncan has very good reason to suspect that Rachel and Oliver are going to do anything they can to frighten him so when he starts to hear all the classic haunted house sounds - the creaking doors, the footsteps on the stairs, chains rattling etc - he naturally assumes that they’re responsible for those sounds.

But Duncan is not quite as confident as he seems to be. Being alone in an old isolated very spooky house, lit only by candles, really is pretty scary. He starts to get a bit spooked. And he suspects that Rachel and Oliver have drugged him as well.

Things don’t turn out the way any of the three protagonists expected when the plot twists start to kick in. The setup might be utterly conventional but Douglas Heyes (a great television) writer knows how to take such a setup and add some nasty twists.

The first thing you’ll notice about this episode is that the exterior shots of Black Oak are in fact the Bates House from Psycho. Thriller was made at Universal Studios and that house (which has been used many times since) was available and let’s face it, it’s a fantastic setting. 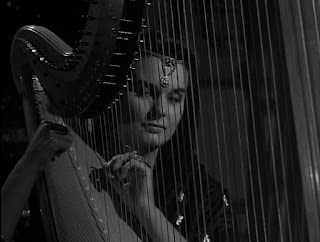 What’s striking about this episode is just how moody and atmospheric it is. And how gothic it is. Low-key lighting, lots of shadows, night scenes. Not quite what you expect from a 1960 television series. It doesn’t really look like television. It looks rather cinematic.

With a very strong cast, great writing and directing by Douglas Heyes and all that atmosphere this really is a very very good episode.

The Prediction (directed by John Brahm and written by Donald S. Sanford) is one of several episodes in which Karloff himself takes the starring rôle.

He plays Clay Mace, who has a very successful mentalist act. Clay is just an entertainer and would never claim to have any actual occult or paranormal powers. Or at least he thought he didn’t have any such powers, until one night he sees a vision of a young boxer being killed in the ring. And the prediction comes true.

Other predictions come true as well. This is very upsetting for Clay. Not only did he never claim to possess such powers, he never wanted to.

Clay’s assistant in his act is a charming young and beautiful woman named Noreen (Audrey Dalton). Noreen’s father is a drunk and treats her badly so she looks to Clay as a substitute father figure. Things get awkward when Clay sees a vision of the future which involves Noreen’s fiancé. The ending is effective and satisfying.

This is another example of Thriller taking an unoriginal idea but making it work, and work very well. Once again there’s plenty of slightly unsettling atmosphere, the visuals are impressive by 1960 television standards, the directing is tight and the performances are superb. 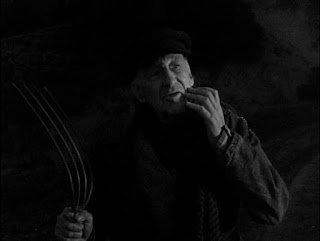 Karloff is in great form - slightly spooky but very sympathetic. Clay is a man desperately trying to come to terms with a very unwelcome gift which threatens his peace of mind and even his sanity. Karloff never overplays his performance.

The supporting cast is strong. Audrey Dalton is charming and likeable. Alan Caillou is terrific as her caddish father. Abraham Sofaer is wonderful as Gus, the owner of the club in which Clay does his act and a loyal friend.

The basic story idea had been done before (most notably in 1934 in the movie The Clairvoyant with Claude Rains) but it’s executed extremely well and Karloff’s performance is enough to make it something special.

Hay-Fork and Bill-Hook (written by Alan Caillou and directed by Herschel Daugherty) really piles on the gothic atmosphere. Detective-Inspector Harry Roberts (Kenneth Haigh) has been sent from Scotland Yard to investigate a murder in the small Welsh village of Dark Woods. An old man was killed - he was stabbed with a hay-fork and a cross was carved on his throat with a bill-hook. Which certainly looks like a ritual murder - this is the way the locals used to deal with witches.

The villagers of Dark Woods are not still living in the Middle Ages, They’re still living in a time earlier than that, a time when druids carried out ritual sacrifices. Witchcraft is taken for granted in Dark Woods. Harry Roberts is appalled to discover that the local policeman (there’s only one), a man named Evans, believes implicitly in witches. The Chief Constable, Sir Wilfred (Alan Caillou), assures Roberts that all the villagers believe in witchcraft. Sir Wilfred is worried that the villagers might found out that Roberts’ wife Nesta (Audrey Dalton) thought she saw a black dog on the road. The villagers think black dogs are symbols of witchcraft. 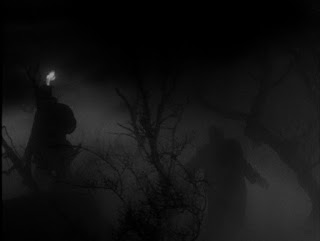 And now the villagers have burnt an old woman for witchcraft.

Harry Roberts slowly comes to realise that the village of Dark Woods is not part of the modern world. He’s not dealing with ordinary murders.

This episode is in some ways an anticipation of the wonderful 1973 British horror movie The Wicker Man, which also deals with a city policeman confronting ancient beliefs in a remote community.

Once again the acting is a major strength and when combined with lots of gothic cinematography the result is a very fine episode.

Well of Doom (adapted by Donald S. Sanford from a story by John Clemons and directed by John Brahm) again features the kind of gothic visuals more usually associated with Universal horror movies of the 30s than with 1960s television. It’s obvious that the similarities to the look of those 30s Universal movies is very deliberate. And the gothic atmosphere is laid on very very thick indeed. The original short story by John Clemons had appeared in the Thrilling Mystery pulp magazine in 1936.

It is night and Robert Penrose (Ronald Howard), heir to a large estate and to be married the following day, is on his way to his bachelor party when he and faithful family retainer Teal (Torin Thatcher) are kidnapped. It’s not an ordinary kidnapping - they have been kidnapped by Beelzebub himself (calling himself Squire Moloch) and his servant Master Styx (Richard Kiel). 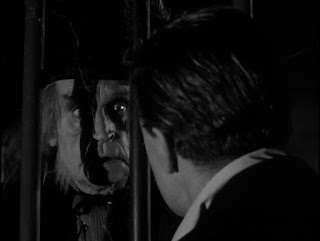 Penrose, who has apparently been a somewhat irresponsible rich young man in his youth, tries to buy his way out of trouble but Moloch informs him that all his money would not be enough to purchase his freedom. Penrose ends up being imprisoned in a dark dungeon where he slowly becomes aware of Moloch’s fiendish intentions.

The story is fine but it’s the visuals and the acting that make this one of the great Thriller episodes. Ronald Howard is excellent as the slightly effete slightly ineffectual hero who is going to have to play the hero if he’s to have any chance of survival. Henry Daniell goes gloriously over-the-top as the evil Moloch. Richard Kiel is equally good as the sinister Master Styx. Fintan Meyler is OK as Penrose’s bride-to-be but it’s really a very small part.

Well of Doom is a perfect example of Thriller at its most typical and at its best.

So, four episodes and all of them excellent and highly recommended. And they’re a fine example of Thriller in its transitional phase from a mystery/suspense series to a horror series.