Thriller - A Midsummer Nightmare and Death in Deep Water (1976) 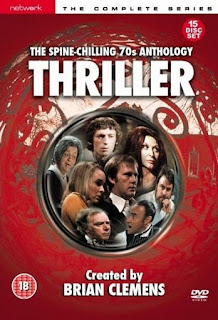 The final two episodes of the Brian Clemens-created British Thriller anthology series went to air in May 1976.

Network in the UK released the compete series on DVD and thankfully they’e the original versions, not the later American versions which added excruciatingly bad extra scenes.

This episode starts with a prologue in which a young woman is murdered in the woods. After the opening credits the scene switches to London.

Jody Baxter (Joanna Pettet) is married to a private detective. They’re still in love but they’re separated because she wants to Be Her Own Person. Johnny (her husband) is off to Rome on a case. Jody offers to mind the store while he’s gone but he dismisses the idea out of hand. But Jody decides to play private detective anyway.

She manages to get herself a case and it’s a murder case. A murder that happened five years earlier (the one we saw in the pre-credits sequence). Arnold Tully (Freddie Jones) doesn’t want her to find out who murdered his daughter. He already knows that. He wants her to find the evidence that will convict the killer.

Detective Sergeant George Briggs (Brian Blessed) tells Jody that Tully is right. It was definitely Peter Ingram who murdered Annabella Tully. The police never had any doubts but they didn’t have enough evidence to be sure of getting a conviction. The case was never brought to trial because the police were hoping that eventually the evidence they needed would turn up.

Briggs, who is a jovial sort of fellow, is quite happy for Jody to investigate the case and he’s happy to offer her whatever co-operation she needs. He would very much like to see Peter Ingram behind bars.

What Briggs hasn’t told her is that Ingram wasn’t the only suspect.

It also turns out that Tully was Annabella’s uncle, not her father. He adopted her when her parents were killed.

Jody isn’t a trained detective but she’s married to one so she’s undoubtedly picked up a few pointers from her husband and she is intelligent and most of all she’s sceptical. She also knows her Shakespeare and she thinks that that might be useful in this case, with both the victim and most of the suspects being theatrical types. And she’d like to know why Annabella’s copy of A Midsummer Night’s Dream wasn’t found near her body. 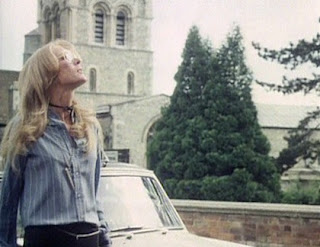 She’s also in considerable danger. It’s a small town. Everybody knows everything that is going on, so the killer obviously knows there’s a private detective snooping around.

Jody is supposed to an American (this was an ITC series so there had to be an American in the cast). Joanna Pettet was English but raised in Canada so playing an American was no problem. Pettet’s career never really took off which is a pity. She was a decent actress and she does a fine job here.

Seeing Brian Blessed on screen is of course always a treat. Freddie Jones was wonderful at playing oddball characters and he’s excellent as Tully, still grieving for Annabella after five years.

For this instalment of Thriller Brian Clemens tuned out a very solid script with a good well-constructed mystery. The audience doesn’t know the identity of the killer and Clemens makes sure we’re kept in a state of uncertainty. There are two obvious suspects and there are other not-so-obvious but definitely possible suspects. There’s good suspense. We know Jody is playing a very dangerous game and she also doesn’t know who the killer is (she’s too sceptical to just automatically assume that it must be Ingram). We’re worried for her right from the start and we get more worried as the story progresses).

I was pretty sure I knew who the killer was, but I was wrong.

The consensus view is that Thriller was running out of steam by this point but I think A Midsummer Nightmare is actually pretty good.

Death in Deep Water was the final episode of Thriller. Gary Stevens (Bradford Dillman) is on the run. He was going to testify against organised crime but changed his mind and decided to get out the United States. Now he’s living in a cottage in a little fishing village in England. He’s bored and going a bit stir-crazy but at least he’s pretty confident he’s safe.

He isn’t bored any more after the blonde in the bikini shows up. She was going for a swim in the middle of a storm and she ended up at his cottage. She figures out who he is pretty quickly. The newspapers say he was a hitman. Since she knows so much he’s going to have to trust her. And he does trust her. He doesn’t know her name so he just calls her Blondie. 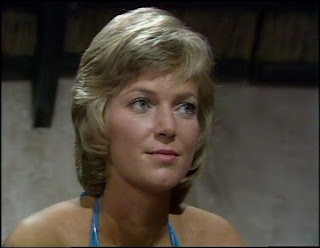 Of course Gary and Blondie begin an affair. And of course they fall in love. Blondie is not the sort of girl who is likely to just walk away from a rich husband. And now the rich husband is taking her away, to Nice. Permanently. Which means the end of the nice little affair with Gary. But there’s nothing to be done about it. As long as her husband is alive she won’t leave him. Of course if her husband was no longer alive she’d be very rich and could do whatever she wanted to.

While Gary and Blondie try to solve this conundrum another hitman has arrived in the village. Burton (Philip Stone) is there to kill Gary Stevens.

Suzan Farmer is very good as Blondie. Ian Bannen is also very good as Gary’s fisherman buddy Doonan. The problem is Bradford Dillman. He gives a rather lifeless performance, suggesting that he just wanted the pay cheque.

Philip Stone was an odd choice to play a hitman. He was a very competent actor and could play sinister rôles but he might have been more at home playing the sort of man who orders others to do his killing for him. The oddness of the casting does work in its own way. And I guess a hitman who looks more like a bank manager or a village pharmacist would be a pretty effective hitman. His American accent is however atrocious.

The script (as usual it was written by Brian Clemens) combines several ideas that aren’t exactly dazzlingly original but Clemens gives them some new touches and throws in some wonderful twists at the end.

Thanks to those twists Death in Deep Water is a pretty high note for the series to go out on.

The last season of Thriller is better than many people would have you believe and both A Midsummer Nightmare and Death in Deep Water are highly recommended.
Posted by dfordoom at 21:00