The Saint - the black-and-white years 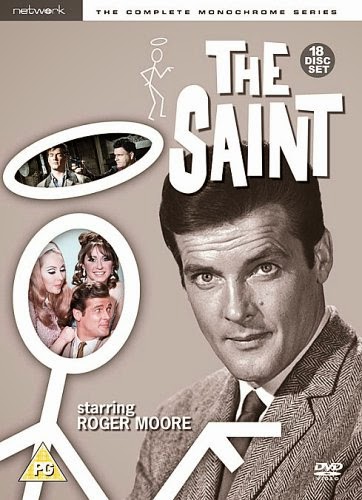 Like many long-running television series The Saint went through a sort of mid-life makeover. The first two series were co-produced by Robert S. Baker and Monty Berman and were based on Leslie Charteris’s own stories. When Berman departed in 1965 Roger Moore and Baker took over as producers, the series switched to colour and there were several minor format changes. The distinctive opening sequence in which Simon Templar breaks the fourth wall to address the audience directly was dropped. While some of the later episodes were based on Charteris’s stories others were completely original stories.

Leslie Charteris created the character of Simon Templar in the late 1920s. By the 1950s The Saint stories had made Charteris one of the world’s best-selling authors. Making a television series based on the character was an obviously attractive idea but the problem was that Charteris had been very unhappy with previous big-screen and radio adaptations and was reluctant to sanction a TV series. He had been particularly displeased by the popular RKO Saint movies starring George Sanders, considering Sanders to have been totally wrong for the role. While Sanders had some of the necessary characteristics to play the character (the smoothness and the hint of ruthlessness) on the whole Charteris was correct. Sanders was too languid and lacked the energy and physical presence the character required.

In the early 60s Charteris finally gave ITC the go-ahead. After considering Patrick McGoohan ITC (very wisely) abandoned that idea and cast Roger Moore, who had wanted to play the role for years. Despite initial misgivings Charteris was happy enough with the choice of star, although he increasingly disliked the series itself. Charteris was never able to accept that adapting a short story for television required some changes in order to fill an hour-long episode. 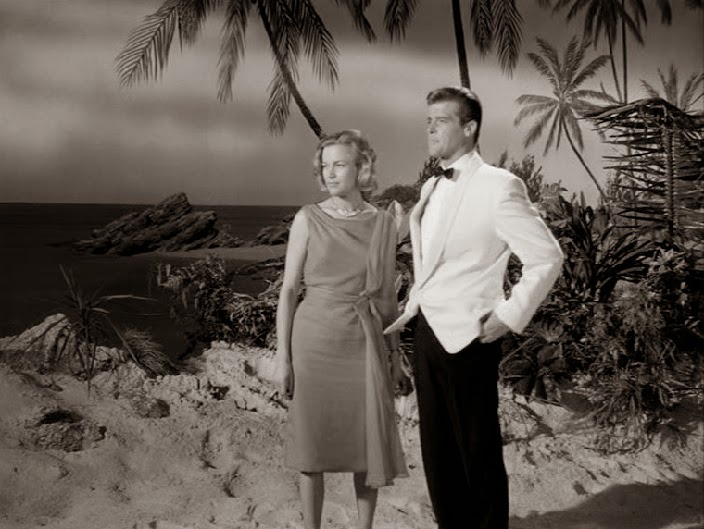 The literary version of The Saint had gone through several major changes, starting off as a an extravagantly larger-than-life devil-may-care and very very English leader of a gang of amateur crime-fighters, then being toned down somewhat and made somewhat transatlantic and finally emerging in the 1950s as a romantic if slightly world-weary loner. Since ITC wanted to give the series a contemporary setting it was Charteris’s later 1950s version of Simon Templar who provided the basis for the TV series. The 1955 short story collection The Saint on the Spanish Main has very much the feel of the TV series.

The best portrayal of the 1930s version of The Saint was Louis Hayward’s performance in The Saint in New York. Hayward captures the manic energy and the schoolboy sense of mischief perfectly. Roger Moore would have been entirely wrong as the Simon Templar of the 30s but he is absolutely perfect for the later version of the character - sophisticated, amused, slightly world-weary and even at times with just a subtle hint of melancholy and even loneliness.

It’s worth mentioning at this point that the famous signature tune that signals Simon Templar’s appearance onscreen was composed by Charteris himself, and Charteris was also responsible for the equally famous stick-figure Saint logo. Charteris loved the fact that his creation became a pop culture icon. Many writers eventually become disillusioned by their most famous creations. Agatha Christie disliked Hercule Poirot and Conan Doyle grew so weary of Sherlock Holmes that he tried to kill him off. Charteris by contrast was delighted by Simon Templar’s popularity, even editing the Saint fan magazine himself in the 50s. 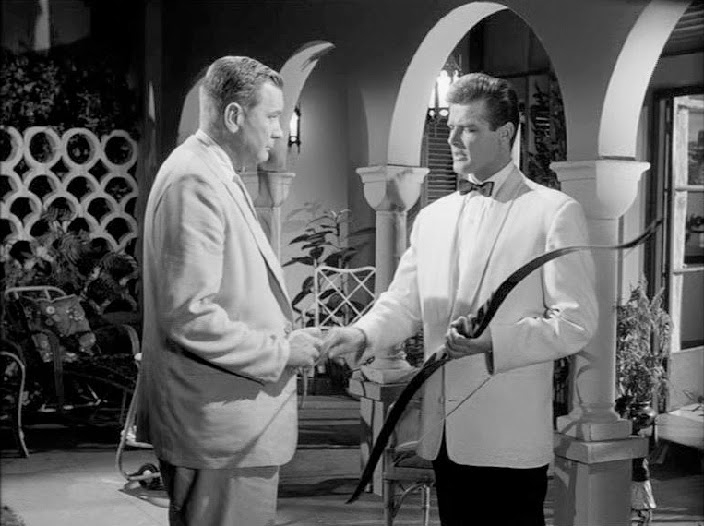 One major problem for a TV adaptation is that while Simon Templar was a hero and very much on the side of justice he operated outside the law. In fact his methods were often quite frankly wildly illegal. The TV series would have to tone this down a little but they could not abandon this aspect of the character altogether. Templar’s disdain for the letter of the law and his decidedly uneasy relationship with the police was an absolutely crucial part of the character’s appeal. You can’t be a modern Robin Hood unless you are also to some extent an outlaw. On the whole the TV series handles this problem reasonably well.

When production started in 1962 the series was very much state-of-the-art as far as television action-adventure series were concerned. By the standards of its day it boasted high production values and looked as slick and professional as any contemporary US series. This was very much in keeping with Lew Grade’s long-term strategy for ITC, to make series that could compete in world markets and most importantly have a chance of cracking the US market. And in the case of The Saint that strategy paid off handsomely. After achieving success in syndication the series was picked up by NBC. Apart from The Avengers it became the most internationally successful British television series of the 60s.

Initially the producers had assumed that British car companies would jump at the chance to have one of their cars featured in a TV series, but to the surprise none were interested. Finally in desperation Volvo were approached and the Swedish car company was delighted to help out. It proved to have been a wise move as sales of their P1800 sports car soared once the series went to air. Roger Moore was so pleased with the car that he bought one himself. 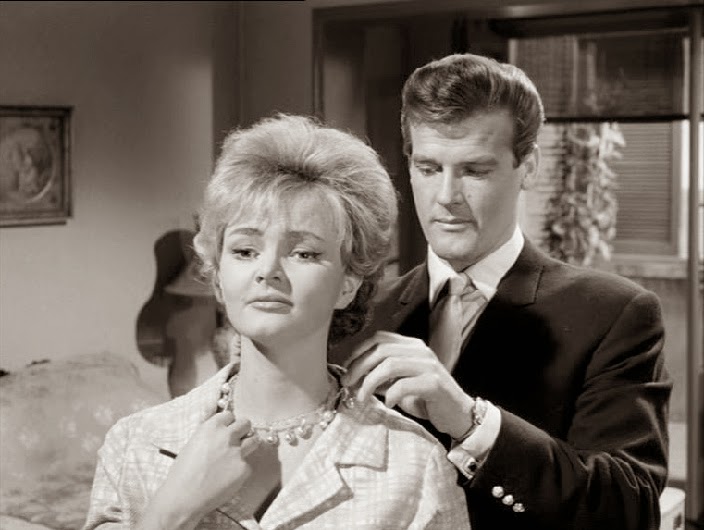 Much of the show’s success was certainly due to Roger Moore. His extremely laid-back acting style and his ability to play the role in a slightly tongue-in-cheek manner without overdoing it and without mocking the character suited the character and the series perfectly.

While the series became a 1960s pop culture phenomenon it’s notable that Simon Templar himself has more of a 1950s rather than a 1960s sensibility. He regards many of the manifestations of 1960s pop culture with amused contempt. He remains throughout the series a slightly old-fashioned hero. Rather than being a weakness, that turned out to be one of the show’s strengths. Had the series tried to make him a truly 1960s character it would have failed. His old-fashioned view of the world makes him something of an exotic, much as John Steed’s old-world manners and dress sense made him an exotic. In fact many of the most successful characters in 1960s British television share this quality. Patrick McGoohan regarded the 1960s as marking the beginning of the degeneration of western civilisation and insisted on playing his iconic 1960s TV characters as characters who were in revolt against the modern world. Adam Adamant’s Edwardian values in Adam Adamant Lives! equally obviously mark him as a rebel against the world of the 60s.

Simon Templar’s 1950s sensibility makes this series rather politically incorrect by today’s standards, a major factor in its favour.

The Saint still holds up remarkably well. The exotic locations that provided the settings for most episodes were achieved in the standard manner for 1960s television, with some stock footage and some imaginative set dressing. While this dates the program it adds to its charm. As producer Robert S. Baker points out in one of the commentary tracks the idea behind the series was not to aim for realism. The show was intended as a tongue-in-cheek fantasy, this being the main reason for having Roger Moore breaking the fourth wall at the start of each story - the viewer is expected to take the stories as stories rather than real life. When you approach the series in this way it still provides an enormous amount of stylish entertainment. Highly recommended.
Posted by dfordoom at 06:21