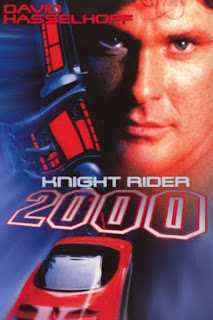 The 1991 TV-movie Knight Rider 2000 was shot as the pilot for what was hoped would be a new series based (a little loosely) on the 80s hit series. Knight Rider 2000 failed to capture anyone’s imagination, was not picked up as a series and seems to be generally disliked by Knight Rider fans.

It should be pointed out that Glen A. Larson, creator of the original Knight Rider, was not involved with Knight Rider 2000. He has an alibi and cannot be blamed for the disaster.

Knight Rider 2000 is set ten years in the future which makes it the year 2000. A new enlightened mayor has implemented some daring new crime-fighting initiatives. They have banned capital punishment. Criminals are instead placed in cryogenic suspension. And the city has banned guns. All guns. Even the police are not allowed to carry guns. Instead they carry stun guns.

The Foundation for Law and Government is in trouble. They had a freelance crime-fighting contract with the city but the city is threatening to cancel the contract. Apparently private vigilante justice organisations are also out of favour in these enlightened times. The Foundation has a new prototype car almost ready for testing, the Knight 4000 (or K.I.F.T.), which will make K.I.T.T. look like a Model T Ford but they need that contract with the city.

Michael Knight has retired. He spends his days fishing. Devon wants him back working for the Foundation. Michael agrees, on condition that he is reunited with K.I.T.T. but there’s a slight problem there. K.I.T.T. has been disassembled and the parts old off.  Fortunately K.I.T.T.’s artificial intelligence still exists so Michael installs it in his ’57 Chevy, much to K.I.T.T.’s disgust. 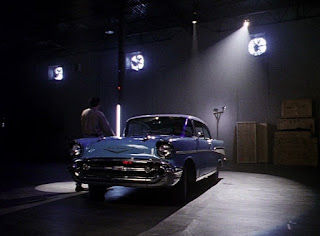 The city has a problem too. Criminals have been committing crimes using real guns, even though that’s illegal! If you can’t trust criminals to obey the law who can you trust?

Devon and Michael have a suspicion that there’s more to all this.

Meanwhile cops are getting shot with real guns. Cops including Officer Shawn McCormick (Susan Norman). Her injuries are not necessarily fatal but Police Commissioner Ruth Daniels (who is already establishing herself as a rather nasty piece of work) orders the doctors to pull the plug on the young officer. But Officer McCormick doesn’t die and now she’s pretty annoyed. She also now has one of K.I.T.T.’s chips in her brain.

Shawn McCormick ends up working for the Foundation but she and Michael make a very uneasy team. Making her very difficult to get along with so there’d be lots of tension between the reluctant partners must have seemed like a good idea at the time but it’s overdone. She’s just too obnoxious and it’s hard to care very much about her.

There’s a complicated conspiracy which seems to involve just about everybody who works for the city.

David Hasselhoff is again the star which provides some reassuring continuity. And Edward Mulhare is still there as well, as Devon Miles. Susan Norman as Shawn McCormick was presumably being groomed as a regular for the series if it went ahead although it’s hard to see such an unsympathetic character becoming a favourite with viewers. 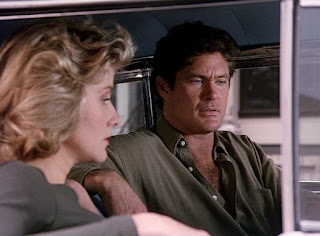 As for the guest cast, Mitch Pileggi makes a pretty sinister master villain.

I can understand why the decision was made to tinker with the format. Just continuing where the old series left off would have been awkward. The black Trans Am which had looked so cool in the 80s was not going to look so cool to younger viewers who would expect the hero’s car to be absolutely the very latest thing. The idea of having a new car, the Knight 4000, was quite a reasonable one even if I personally (in common with most fans) preferred that black Trans Am. And the idea of installing K.I.T.T.’s artificial intelligence into a ’57 Chevy wasn’t too bad. It kind of works in a light-hearted way.

The switch from a contemporary to a near-future semi-dystopian setting was not necessarily a terrible idea. The biggest problem with this was that Knight Rider 2000 starts getting entangled in politics in an overt way. If you’re going to try to do a series in which capital punishment, euthanasia and gun laws are key plot elements you’re going to get hopelessly enmeshed in politics which is probably a very very unwise idea. The original Knight Rider took a very sceptical view of government and authority but was (mostly) careful not to get into specific political issues.

The biggest problem of all is that the radical alterations to the format were always going to antagonise fans of the original series and it’s difficult to see how a new series could succeed if the existing fan base hated it right from the get go. In fact there are other events that occur in the movie that seem calculated to maximise the irritation of established fans. 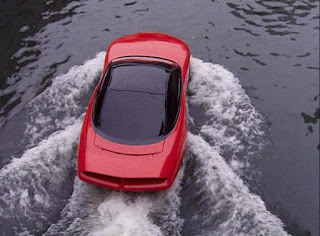 The Knight 4000 (which I believe is a modified Dodge Stealth) looks OK but it doesn’t look as business-like and menacing as that old black Trans Am.

The music was always one of the strengths of the 80s Knight Rider. Sadly that can’t be said for Knight Rider 2000.

Knight Rider 2000 isn’t quite as ghastly as some people would have you believe. It’s moderately entertaining. It just doesn’t seem like a concept that could ever have won over the pre-existing fan base and it doesn’t have enough to offer to grab lots of new fans. The best elements of the original series have either been eliminated, or seem like they’re destined to be eliminated, or they’ve been diluted and the new elements don’t have as much appeal. And the new car somehow isn’t quite right and after all it’s the car that is the real star.

Knight Rider 2000 is included as an extra in the Knight Rider season 1 DVD boxed set (here's the link to my review of season 1). The transfer is reasonably OK. Since you’re getting this one as a freebie it’s probably worth giving it a spin for its curiosity value. Especially if, like me, you have a morbid fascination with failed series pilots.
Posted by dfordoom at 03:27