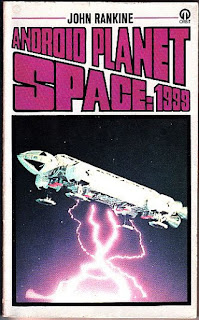 Gerry Anderson’s 1970s science fiction TV series Space: 1999 spawned quite a bit of merchandising. This included a whole series of novelisations, but more interestingly it also included five original novels. One of these original novels was John Rankine’s Android Planet which appeared in 1976.

The inhabitants of Moonbase Alpha, hurtling through the galaxy after a catastrophic nuclear explosion threw the Moon out of Earth orbit, need to find a new home. They cannot survive indefinitely on the Moon. They must find a planet on which they can settle. And now they think they may have found a suitable planet. It’s the kind of story that the series dealt with on numerous occasions.

The plan is to send one of their Eagle spacecraft on a reconnaissance mission to the planet’s surface. If everything checks out satisfactorily they will begin transferring all three hundred Moonbase Alpha personnel to their new permanent planetary home.

The problem is that this planet might be inhabited already. In fact it seems very likely that this is the case. It seems even more likely that the present inhabitants are not at all inclined to welcome new settlers. Their lack of good neighbourliness is demonstrated by two fairly serious attempts to wipe out Moonbase Alpha  and all its crew. Nonetheless Commander John Koenig decides to go ahead with the recon mission.

Given the book’s title you won’t be surprised to find that the planet is inhabited by androids. The androids are not the only inhabitants. The idea of robots becoming so intelligent that they no longer have any need for their creators is a well-worn science fiction trope but Rankine does add one twist. The robots and their creators (the Copreons) are both still around, they’re on hostile terms but neither seems able to destroy the other. The question for Commander Koenig is whether the Alphans can trust either the androids or their humanoid creators, and whether a planet that is in a permanent state of semi-warfare is really likely to be a suitable home.

The story combines several popular science fiction tropes. The most interesting aspect of the tale is that the people of Moonbase Alpha certainly did not intend to do any harm to the planet’s inhabitants, either the humans or the androids, but their arrival (and the temporary presence of the Moon’s gravitational field) has created chaos. It also sets up a fascinating dynamic with three civilisations - the Alphans, the Copreons and the androids - all of whom want something out of the others, all of whom feel threatened and all of whom have been perhaps not entirely honest.

It also makes use of one of the clever features of the Space: 1999 format - when Moonbase Alpha encounters a planet that might be a suitable permanent home they have only a few days to make a final decision, before the Moon goes hurtling past the planet. So there’s always a race against time element, and that time element plays an important part in this story.

The most important thing about any TV tie-in novel is that it has to be consistent with the feel of the original TV series and the main characters have to be recognisably the characters from the TV series. In this respect Rankine succeeds extremely well. Space: 1999 Year One was a successful mix of action/adventure elements and reasonably intelligent science fiction concepts (reasonably intelligent by television standards that is). And that’s the feel that Android Planet achieves fairly successfully.

As for the characters, John Koenig has the right mix of charisma, arrogance and serious-mindedness. He’s a man more respected than loved. That’s pretty much exactly the way the character comes across in the TV version as well. His relationship with Dr Helena is more overtly sexual than in the TV series. Rankine seems most interested in the relationship between Koenig and Dr Victor Bergstrom, the base’s resident expert in all matters scientific. Koenig is the man with the leadership ability; Bergstrom provides the brains.

Personally I think E. C. Tubb’s Alien Seed is a better Space: 1999 original novel, being both better written and a better story. Android Planet though is certainly not a complete washout. It’s entertaining enough. It’s perhaps a bit too obsessed with sex for my liking but this was the 70s and every single book published in that decade had to have gratuitous sexual content. At least there’s no actual graphic sex in Android Planet, just a slightly annoying and intrusive sexual subtext. Apart from that Rankine’s prose style is serviceable enough.

Android Planet should certainly be enjoyed by fans of the TV series. It’s a decent enough science fiction story. Recommended.
Posted by dfordoom at 06:31