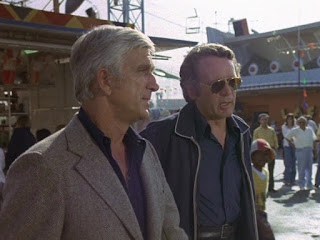 Two more episodes from the fifth season of Columbo which went to air in late 1975 and early 1976.

Identity Crisis
Identity Crisis is another odd season five episode of Columbo. The previous episode, A Case of Immunity, dealt with international politics. Identity Crisis plunges Columbo into the worlds of espionage and counter-espionage. A man is found dead on the beach, apparently the victim of a mugger. In fact the guy was an intelligence operative and he was murdered by another intelligence operative. Nelson Brenner, the murderer, is a very well-connected operator. We’re talking very serious CIA connections.

Columbo doesn’t know any of this at first although he does have a slight suspicion that there is something odd going on when he realises he’s being followed.

Columbo is used to having suspects who try to intimidate him and claim that they have all sorts of important friends who can put pressure on the police commissioner but in this case he’s dealing with a guy who really does have some very very powerful friends that you just don’t want to get on the wrong side of.

Patrick McGoohan plays Brenner and it’s a typical McGoohan performance with all sorts of paranoias and obsessions and weirdnesses bubbling away under a super-confident exterior.

Leslie Nielsen plays the spy who ends up dead on the beach. This was before Nielsen reinvented himself as a comic actor and he plays this rôle very straight indeed, and plays it pretty well too. 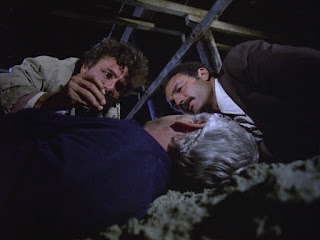 McGoohan also directed this episode (it’s one of several Columbo episodes he directed) and he does so with considerable style. Fans of The Prisoner will be in bliss - McGoohan throws in lots of subtle references to his classic spy series and yes, he says "Be Seeing You" on multiple occasions.

William Driskill’s script has a few weaknesses, the biggest one being that while Columbo successfully demolishes the killer’s alibi he really didn’t have anywhere near enough evidence to justify an arrest.

The motive is crucial and it’s only mentioned once in passing but it is mentioned and it’s more than sufficient motive for murder.

A Matter of Honor
A Matter of Honor shows just how dangerous it is for detectives to take vacations. If you’re a famous detective your vacations are destined to be blood-drenched. Columbo should have learnt his lesson after his murder-plagued ocean cruise in season four. In this case it all starts with a minor car accident in Mexico. Commandante Sanchez (Pedro Armendáriz Jr.) then invites Columbo to join him on a very routine investigation. A tragic accident has occurred at the ranch of Luis Montoya (Ricardo Montalban). Montoya’s old friend and right-hand man Hector Rangel has been gored to death by a bull. Columbo of course can’t help himself. He starts to poke around and he starts to notice things. Things that worry him. Maybe this wasn’t an accident after all. 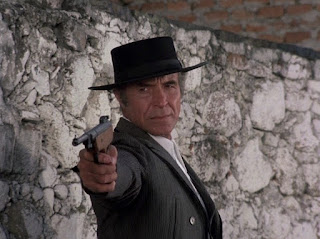 Commandante Sanchez now finds himself with a big problem on his hands. He agrees with Columbo that there are certain details that are suspicious and that further investigation is warranted. But Sanchez does not want to do the investigating. It’s not that he doesn’t consider himself competent. He has no doubts about his own abilities. It’s not that he would ever turn a blind eye to murder. He is much too good a policeman to do that. But Luis Montoya is a living legend, a national hero. If he is seen to be suspecting Montoya or murder and if he than fails to come up with the necessary evidence then Commandante Sanchez is going to be the most unpopular policeman in Mexico. On the other hand if a nosy gringo cop is seen to be the one doing the investigating then Sanchez can stay in the background.

As it happens Columbo likes Sanchez and is amused by the way he’s been manoeuvred  into the case. And the case intrigues him, so he’s happy enough to take it on. It’s a neat way of explaining how Columbo gets to take the lead on a case in a foreign country.

There are some neat clues in this one. What I particularly like is that the unravelling of the clues requires Columbo (and the viewer) to learn some odd facets of bullfighting lore. The motive is crucial, and it’s a motive that is entirely appropriate to the nature of the case. It’s the motive that makes this a memorable episode. 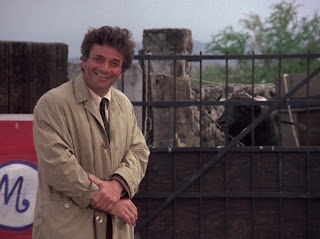 The one major weakness is that while everything is for the most part fairly clued it’s not clear exactly how Columbo figured out the motive.

Ricardo Montalban is excellent (as always). He plays Luis Montoya as a man of considerable charm but also as an extraordinarily vain man who is prone to losing his temper if he thinks his honour is in any way at stake. Unlike most of the suspects in Columbo stories Montoya does not enjoy the battle of wits with the detective. He is angry and resentful right from the start.

This episode is another example of season five trying to be a bit different. Previous episodes have involved international incidents and espionage and then this one takes place entirely in Mexico. The desire to experiment just a little with the details of the Columbo formula is understandable enough after five seasons. And so far I’d have to say that attempts at adding a bit of variety have worked pretty well.

A Matter of Honor is perhaps not one of the very best Columbo episodes but it’s still very good and very enjoyable and definitely recommended.
Posted by dfordoom at 23:33