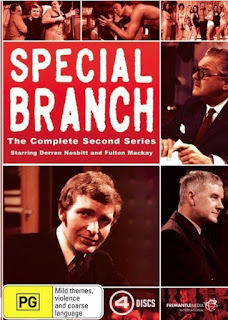 Special Branch was a police drama series produced by Britain’s Thames TV from 1969 to 1974. It dealt with Special Branch officers, policemen whose duties included arresting spies, protecting VIPs, border security, conducting background checks on people in about to be appointed to sensitive jobs and collecting intelligence on subversive organisations. They were not spy-hunters as such, that was the job of the Security Service (MI5), but they acted as the enforcement arm of that service.

Special Branch had a difficult job. They had to respect the rights of citizens in a free country while protecting those citizens from very real threats, and while dealing with interference by politicians and bureaucrats.

The Special Branch officers in the TV series have a very uneasy relationship indeed with the Security Service, in the person of Charles Moxon (Morris Perry), a man who raises cynicism, ruthlessness and deception to new heights.

The first season (which I reviewed here) was successful enough to justify a second season.

The third and fourth seasons which followed were effectively a brand new series which had its merits but personally I think the first two seasons are more interesting and more subtle. Plus those first two seas\ons have Derren Nesbitt who is an absolute joy as the sartorially outrageous but actually rather serious-minded Chief Inspector Jordan. The chemistry between Nesbitt and Fulton Mackay (who plays Jordan’s boss Chief Superintendent Inman) is superb.

The second season, like the first, is pleasingly varied. It’s not all action stuff. Some cases are dangerous and exciting, some are frustrating, some are breathtaking exercises in governmental cynicism and incompetence.

While it’s poles apart stylistically from the violence and paranoia of a series like Callan Special Branch does have some similarities when it comes to tone. Espionage and counter-espionage are vicious grubby games whichever side is playing them. In Special Branch, as in Callan, both sides are as bad as each other. There is no room for good guys.

There is a kind of long-running story arc in the first two seasons, involving Christine Morris (Sandra Bryant). Christine Morris is a KGB officer and a dedicated and intelligent Soviet spy. Somehow she and Jordan just seem to keep encountering each other and there’s clearly a very strong sexual and emotional attraction on both sides. If you’re a Special Branch officer it’s obviously not very good for your career prospects to have a special lady friend who’s a captain in the KGB. Jordan does everything he can to avoid getting involved, but their paths just keep crossing. Christine Morris appears in half a dozen episodes and it’s obvious that she’s going to cause continuing complications for Jordan. 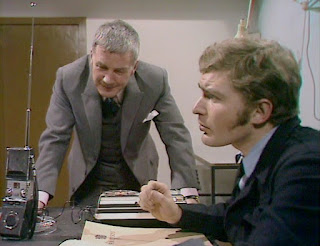 There’s also a certain degree of character development, certainly to a greater extent than you expect in a TV series in 1970. Chief Inspector Jordan is a keen, dedicated and ambitious Special Branch officer. He’s realistic enough to accept that his work can involve some ethical balancing acts. He believes he can deal with this. He’s certainly not naïve to start with but as the series progresses he becomes just a bit more cynical, and perhaps just the tiniest bit disillusioned. It’s not enough to make him consider resigning, but his enthusiasm takes a bit of a beating. As the second season progresses even Chief Superintendent Inman, a hard-headed and very unsentimental Scot, seems to be getting tired of dealing with the duplicity of the Security Service.

There’s definite character development in the case of Christine Morris, and the relationship   between Christine and Jordan certainly develops.

By the standards of television of its era Special Branch was very heavily character-driven, morally complex and ambiguous and remarkably intelligent.

The Episode Guide
The first episode of season 2, Inside, sees Chief Inspector Jordan in prison. He is working undercover hoping to extract some information from a convicted spy. He needs to find out the name of the spy’s controller but this spy is as psychologically tough as they come.

Dinner Date takes Chief Inspector Jordan and Detective Constable Morrissey to Frankfurt. A British national has escaped from East Germany and their job is to bring him back to Britain. A relatively simple job, but it turns out to be anything but simple, especially when Jordan has a rather close and somewhat romantic encounter with a glamorous female KGB agent.

Miss International presents Jordan with what should be a rather pleasant assignment - keeping watch over a beauty contest, or more specifically keeping watch over a girl from a Middle Eastern country who is one of the contestants. The girl is the daughter of the most powerful man in that particular country. Threats have been against the daughter, apparently from conservative religious groups. That might seem plausible enough but it soon becomes evident that there is much more to it than that. Some shady politics is involved so it’s no surprise that Moxon takes a hand in the case and Chief Superintendent Inman and Chief Inspector Jordan find themselves having to dance to Moxon’s tune. The episode is typical of the cynical approach of this series, focusing on byzantine political scheming at high levels with Special Branch officers being not much more than pawns. 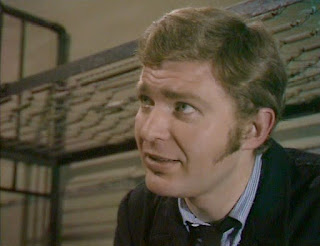 In Warrant for a Phoenix Jordan has to arrest a Greek historian, Emil Kazakos, for the theft from a Greek museum of a bronze phoenix dating from the 8th century BC. Both Jordan and Chief Superintendent Inman find the whole case to be somewhat puzzling and suspect that politics may be involved. Detective Constable Jane Simpson, assigned to look after the historian’s wife while he awaits an extradition hearing, has her own theory. As a woman she feels there is something not quite right about the Kazakos’s marriage and she thinks it has a bearing on the case.

An examination of the bronze just makes things more puzzling. Warrant for a Phoenix is a good episode with some effective misdirection.

The Pleasure of Your Company is the sort of spy thriller the British always do so well. No action but plenty of suspense, some very nasty twists and an atmosphere of betrayal and duplicity. The new CIA station chief in London is causing headaches for everyone, including the CIA. Chief Inspector Jordan is caught in the middle, but even more embarrassingly he’s once again thrown together with glamorous (and extremely amorous) KGB agent Christine Morris. He had an affair with her in the past, which was not on the whole a very good career move. Now he has to find a way to keep out of her bed whilst also following his orders which almost seem to be forcing him into her arms.

Not to Be Trusted deals with a British scientist who is under suspicion. There is reason to believe that the Russians will make an attempt to recruit him as an agent. The question  is whether Dr Clifford is likely to react favourably to such an approach. His chaotic personal life, his drinking and his affair with a young Swedish girl with dubious political leanings are further causes for concern.

Borderline Case is one of the weaker episodes. A revolutionary group is stirring up trouble on the docks and the Special Branch officer, Detective Sergeant Sherman, keeping an eye on the ringleader gets a bit too personally involved. It’s all a bit contrived and it’s let down by an overly obvious performance by Davyd Harries as Sherman.

Love from Doris concerns a pen pal racket aimed at servicemen, a matter that raises some serious security worries. Some of the lonely servicemen have revealed a bit too much in the way of professional secrets. 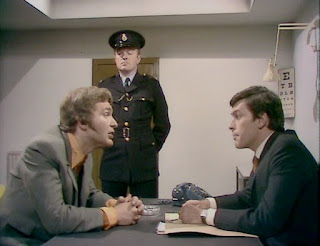 Sorry Is Just a Word is an episode that reminds me why I like this earlier 1969-70 version of Special Branch so much more than the more action-oriented 1973-74 version. It’s a very low-key story, with zero action, but it’s all about the characters and their motivations. A young Czech girl goes missing in London. The Czech Embassy seems remarkably worried, much more upset than you would expect if she was just an ordinary Czech girl. In fact she’s not just an ordinary girl, not as far as the Czech government and the British Foreign Office are concerned, and yet in other ways she’s a very very ordinary normal girl. She just wants the things that normal teenage girls want. In theory it’s a very routine case but no case is routine if you happen to be caught up in the middle of it and you have ordinary human emotions. Chief Superintendent Inman and Chief Inspector Jordan understand this. They have their job to do but they never forget that they’re dealing with actual people. Moxon represents a government functionary of a different sort, one to whom human emotions are an irritating irrelevance. A low-key story perhaps, but still an excellent episode.

In Error of Judgement Special Branch are investigating a radical environmental group but it’s strictly routine. The Guardians seem very earnest but pretty harmless. On the other hand Moxon seems very interested indeed in this organisation and if the Security Service is interested there may be more to it. There may be a lot more to it. By a very curious coincidence Chief Inspector Jordan has a minor traffic accident and the other driver involved just happens to be a member of the inner circle of the Guardians. An excellent episode with Jordan having a mixture of good luck and bad luck.

Reported Missing is a tale of two defectors. Both have chosen an inconvenient time, the visit of the Russian Ballet to London. The British Government wants the visit to go smoothly but a Russian ballerina has absconded and the press is going ballistic and Chief Superintendent Inman and Chief Inspector Jordan have enough on their plate without a second defector to worry about. And there’s another problem - there are defectors and there are defectors. Some have legitimate claims to political asylum, others not so much. Having a strong case helps, but being young and pretty helps even more. Knowing how to manipulate the media is even more useful. Even Moxon has to admit that it’s a grubby business. Another fine episode.

Fool's Mate provides Jordan with a lesson in chess and other more serious games. Once again his opponent is Christine Morris. This time it’s even less clear which side she’s on. The problem is that this is a game that Chief Inspector Jordan cannot decline to play. He discovers that participation is compulsory. An excellent episode.

Summing Up
Special Branch, in its original 1969-1970 incarnation, is one of the most intelligent and provocative series of its time. It still stands up today as a series characterised by subtlety and ambiguity. It manages to combine all this with very high entertainment value.

Certainly one of the great British TV drama series. Very highly recommended.
Posted by dfordoom at 02:53