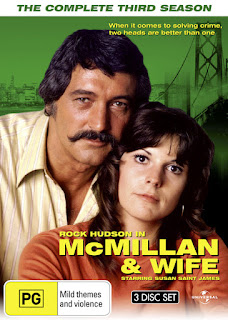 The third season of McMillan and Wife is basically the formula as before, but with perhaps a slightly more outrageous tinge.

The format is still the same, which each season comprising a handful of feature-length episodes.

It still relies a good deal on the superb chemistry between Rock Hudson and Susan Saint James. Mrs McMillan is still managing to get herself quite innocently mixed up with just about every major crime in San Francisco. And somehow Stewart McMillan, the Police Commissioner, is still managing to find excuses to take personal charge of investigations in a way that no actual police commissioner ever would. The fact that these two elements in the formula stretch credibility to breaking point is no problem at all. McMillan and Wife does not pretend even for a moment to be a realistic cop series. It’s a series that follows the conventions of the puzzle-plot mysteries of the golden age of detective fiction in which the detective hero is always conveniently on the spot whenever a murder occurs, and always seems by an uncanny coincidence to have some link to either the victim or the killer. It was a type of fiction that actively rejected realism, and McMillan and Wife rejects realism in an exceptionally thorough way.

It’s also a series that to some extent traces its ancestry back to the 1934 hit movie The Thin Man, which established the husband-and-wife crime-solving team as guaranteed box-office gold.

The season opener is Death of a Monster... Birth of a Legend and it takes Commissioner McMillan and his wife Sally to Scotland for a vacation. They’ll be staying in the McMillan castle, owned by the laird who happens to be McMillan’s uncle. And while it might seem very strange that Sergeant Enright should suddenly show up at the castle that’s exactly what happens.

The very first thing that happens after the Commissioner and his wife arrive is that the old laird shoots himself. In fact McMilan doesn’t even get to see his uncle alive. It’s obviously suicide. 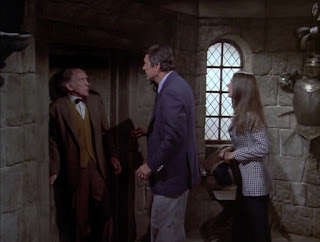 McMillan however seems rather unconvinced by the suicide explanation. The viewer of course knows it can’t be suicide because then we wouldn’t have a story.

There's a certain “it was a dark and stormy night” ambience to this story. The family solicitor tells ghost stories, in this case about a ghost who would have a very good reason to be ill-disposed to the Laird McMillan.

If you’re going to have dark and stormy nights and ghosts and castles you might as well go for broke and have all the gothic trimmings including secret passageways. Which is exactly  what we get.

Apart from the gothic angle this is also an attempt at a locked-room mystery and while there’s an obvious explanation that explanation is not necessarily the correct one.

Now at this point you might be thinking that this is all a little bit far-fetched if not silly. If you are thinking that you should just stop. This is McMillan and Wife and McMillan and Wife was never intended to be taken very seriously. It’s lightweight and it’s meant to be lightweight. The idea is to have a mystery, a few thrills, a few laughs and some romantic moments. Some episodes do contain fairly decent mystery plots but they’re still essentially supposed to be harmless fun.

I should also point out that there’s still a lot more silliness to come. There’s still the matter of the monster.

There’s an obvious motive in the old laird’s unwillingness to sell the castle (a hotel consortium wants to buy it) but that motive could point to more than one suspect. And there are other plausible motives. 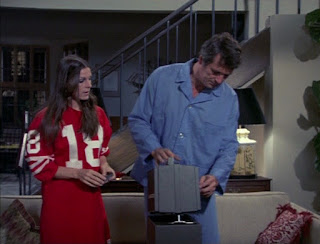 The guest cast is headed up by the always delightful Roddy McDowell. He’s the laird’s grandson Jamie and he’s not exactly the black sheep of the family but he’s also not quite the grandson the old boy would have wished for. Jamie is rather hard-up for money and he also has a very expensive fiancée who is likely to develop into an even more expensive wife.

The solution is far-fetched but it’s clever enough and it is fairly clued and it is just about plausible.

Death of a Monster... Birth of a Legend offers plenty of fun.

The second episode is The Devil You Say and it continues the gothic theme, and also the outrageousness, of the first episode. This time Sally’s life is in danger from devil-worshippers. She gets a call from Dr Comsack at the children’s hospital where she does volunteer work with deaf kids. It’s not quite clear if it’s Sally who’s in danger or Dr Comsack. Mildred might be in danger as well, after witnessing a murder that didn’t happen. There’s also the matter of the film of the Satanic ritual that someone sent Sally. The same person also sent her some other curious items. Those items are obviously significant, but significant of what? If that’s not enough craziness for you there’s Dr Comsack’s totally insane and creepy wife and there’s Professor Zagmeyer who is an expert in hypnotism, reincarnation and Satanism.

So this episode has pretty much the entire quota of the lunacy that was so characteristic of the 70s. 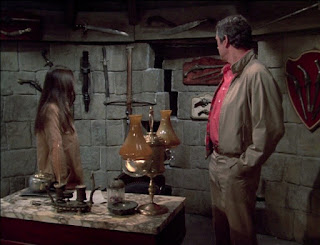 Once again there are some deliriously over-the-top performances from the guest stars, especially Keenan Wynn as Professor Zagmeyer, Werner Klemperer as Dr Bleeker (best-selling author of a diet book but we get the strong impression he’s probably into some seriously weird stuff as well) plus a truly bizarre performance by Barbara Colby as the loopy Mrs Comsack.

And once again it always seems to be a dark and stormy night. The masks are however a very effective sinister touch. This one overall is even nuttier than the previous episode. The plot hangs together well enough. You don’t have to believe all the crazy stuff, as long as you’re willing to believe that the characters themselves do believe every word of it.

The Devil You Say is highly enjoyable nonsense.

These two episodes get season three off to a most entertaining start. I’ll be reviewing the other four episodes in the season in the near future.

You might also be interested in my reviews of McMillan and Wife season one and season two.
Posted by dfordoom at 21:28