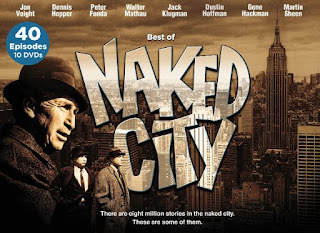 The Naked City was a bad movie but a very influential one. Naked City was a good TV series and a very influential one. Naked City started out in 1958 with the half-hour format that was still more or less standard at that time. It did not do particularly well and was actually cancelled. It was then re-engineered and relaunched in 1960. The change to hour-long episodes was crucial. This is a series that takes a leisurely approach to is subject matter. It’s a world away from the frenetic excitement and urgency of a series like M Squad (made at almost exactly the same time). Naked City is a character-driven police procedural series. It takes the time to let us get to know the characters.

Naked City is also notable for featuring a substantial amount of location shooting. One thing it does share with M Squad is a gritty realistic feel. This is a serious attempt to show us life on the streets of New York - the sleaze as well as the glamour.

It should be emphasised that this was not all that startling in 1950s American television. American cop shows like the aforementioned M Squad and Dragnet (this is the 50s Dragnet I’m talking about, not the woefully inferior revamped 1967 version) could be surprisingly hard-hitting and intelligent. Both cop shows and private eye shows (such as Johnny Staccato and Mickey Spillane’s Mike Hammer) of that vintage were still heavily influenced by the dark-themed crime movies of the 40s and early 50s that we now label as film noir. There was a lot more to 1950s American television than Ozzie and Harriet and Leave It To Beaver. The difference with Naked City was mostly one of degree - it used the hour-long format to delve more deeply into the private lives of not just the cops but also the criminals and the victims and the innocent bystanders. 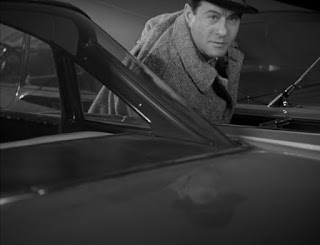 Madacy  released a 10-DVD boxed set that includes 40 of the 99 hour-long episodes of Naked City (it doesn’t include any of the 39 half-hour episodes from the first season). It’s enough to give a pretty good impression of the excellent series. The boxed set includes nine episodes from the second season which aired from 1960 to 1961 and it’s season two we’re concerned with at the moment. Horace McMahon as Lieutenant Mike Parker and Harry Bellaver as Sergeant Frank Arcaro were joined by Paul Burke as Detective Adam Flint for the revamped hour-long second season that went to air for the first time in October 1960.

A Death of Princes demonstrates the willingness of this series to tackle dark themes of a type that would have been likely to provoke extremely hostile responses from the police at that time. It deals not just with a corrupt cop, but a corrupt out-of-control killer cop.

The hero of the series, Detective Adam Flint (Paul Burke), sees his partner Detective Peter Bane (Eli Wallach) gun down an unarmed suspect. The problem is that while he can bring departmental charges against Bane there’s no way he can make them stick. He knows that, and his boss Lieutenant Mike Parker (Horace McMahon) knows it too. The only thing to do is to keep an eye on Bane. Sooner or later he’ll make a wrong move.

Flint doesn’t have long to wait. Bane is mixed up in an an extraordinarily complex conspiracy. It’s the sort of thing that only an incredibly arrogant man could think he could get away with.

Debt of Honor begins with a very high stakes card game, which is interrupted by three punks with masks and guns. One of the card players gets shot dead. One of the other card players is Nick Mori (Steve Cochran). The punks might have had second thoughts about their plan to rob these high rollers if they had known that Mori was a gangster. 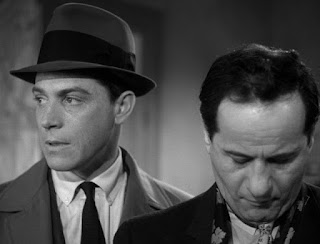 Mori has other things to worry about. His wife has just arrived from Italy. He has never met her. It’s a complicated story. Mori owed a debt of honour to a very important man in the old country. When that man was dying he told Nick that he would have to discharge his debt by looking after the old man’s daughter. The best way to do that would be to marry her and bring her to the United States. Now he was to explain to her that he doesn’t want it to be a real marriage, which is a problem since she is filled with determination to be a wonderful wife.

To make things more interesting Nick isn’t actually a gangster as such. Not quite. He clearly has Mob connections. He movies in those circles. He’s no Boy Scout. But he isn’t an actual gangster and he’s really not a bad guy. He has no idea what to do with this wife he has suddenly acquired but one thing is certain. He doesn’t want to make her unhappy. He doesn’t want to hurt her. She’s an embarrassment to him but she is his wife.

Steve Cochran was a fine actor who never achieved real stardom but appeared in several bona fide film noir classics in the 50s including Private Hell 36 and the superb Highway 301.

The Man Who Bit a Diamond in Half is a heist story and a delightfully complicated one. The police have no idea that the heist is being planned. All they have is some events that don’t make sense. A museum security guard shot but all that is stolen is a replica of a valuable diamond, and it was clearly marked a being a replica and being worthless. And there’s a wealthy Greek who wife’s valuable bracelet appears to have been stolen but it wasn’t stolen. There are other little things but they make even less sense. Detective Adam Flint doesn’t like it. He has this feeling that there is a connection, if only he could see it. Some nice twists in this one. Very entertaining.

Murder Is a Face I Know is about Nick Ross, an immigrant who is the American Dream personified. A hard worker, a loving husband, a devoted father, a solid citizen. The kind of man you’d be proud to know. Except for one minor detail. He’s also a contract killer for the Mob. His son Joey (Keir Dullea) is not surprisingly having trouble accepting all this. The police are having troubles of their own with the case, with Ross refusing to say anything at all. A good episode. 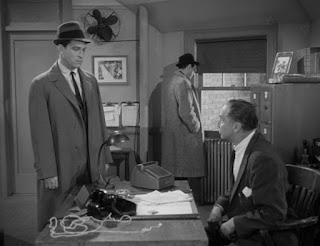 A Hole in the City starts out with a series of spectacular chases and shootouts and then becomes a hostage drama. But mostly it’s a psychological drama about a very strange young man. Lewis Nunda (Robert Duvall) has masterminded an armoured car robbery that has left a trail of corpses. It all started in his childhood.  He has a lot of childhood grudges and he’s never forgotten them and they’re all based on his total inability to understand the world. An episode that is very ambitious and very pretentious but mostly it works. And it ends with another very impressive action set-piece.

Button in the Haystack presents Adam with a real headache. A man was murdered in a service station and thee is very strong, almost overwhelming, evidence against the guy who runs the service station, an ex-con named Brewer. But Adam thinks he’s innocent. To prove it he has to find Brewer’s gun and that turns out to be an almost impossible task. This story is enlivened by a bit of humour and it works very well.

Shoes for Vinnie Winford is the story of a rich little boy who grows up to inherit his father’s vast business empire. Only Vinnie Winford never does grow up. He now has immense wealth and power but he’s still a little boy. A spoilt over-indulged little boy. A little boy with severe mommy issues. A little boy with a violent temper. Although he owns a huge business empire the one business that really matters to him is his dance hall, a sleazy business to be sure but it’s the only thing he has ever actually built up by his own efforts. And it’s the dance hall that will get him into trouble. One of his hostesses has disappeared. Vinnie has taken steps to make it seem like Judy Hill never existed but Adam Flint believes the story that Judy’s friend Ruby tells him. Nailing Vinnie will however be quite a challenge.

The best thing and the worst thing about this episode is Dennis Hopper’s performance as Vinnie. It’s certainly memorable. It may be the hammiest performance in the history of American acting. It’s like Hopper is channeling James Dean in Rebel Without a Clause (which also deals with the 50s fear that bad mothering was the cause of all social ills) but Hopper is even more ludicrously over-the-top than Dean. If you happen to get a kick out of  unbelievably excessive Method acting you’ll find Hopper’s turn in this episode to be bizarrely fascinating. 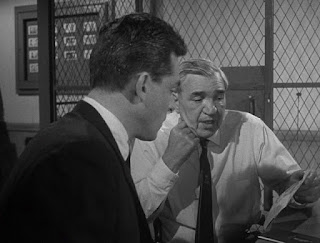 On the plus side there are some great shots of 1960s New York street scenes and the bridge climax is pretty impressive.

New York to L.A. starts off with lots of frustrating inaction. Detective Flint and Lieutenant Busti are in L.A. to take custody of two punks accused of armed robbery and murder but the extradition hearing looks like it’s going to drag on forever. Then suddenly all hell breaks loose. This is one of those episodes that taps into 1950s obsessions with child-rearing and psychology. The two punks were raised in an orphanage and the script goes perilously close to casting a couple of vicious hoodlums as victims although it’s not clear what they are victims of. This sort of thing can be a bit cringe-inducing. Despite some exciting action scenes this one is a bit of a failure.

Vengeance Is a Wheel deals with a gang that has staged a series of daring waterfront warehouse robberies. A night watchman is killed during one of the robberies. He was an Italian and his family decide that they will not coöperate with the police. They will deal with the matter themselves. It is to be a vendetta. Not just a vendetta as a figure of speech but the genuine article, just like in the old country. This is awkward for Adam as he knows and likes the murdered man’s family. Ethnic violence was a fairly daring theme for television to tackle in 1960. The Untouchables had tried hinting that maybe there were Italians involved in organised crime in the days of Prohibition and that had unleashed a storm of protest. Vengeance Is a Wheel is a fine episode.

But this is fairly typical of Naked City’s willingness to deal with serious subject matter in a grown-up way. Naked City has a good deal of the gritty flavour of the classic American crime B-movies of the 40s and 50s and there’s certainly a film noir tinge to a number of episodes. What makes Naked City so good is that it has that seriousness of intent and that slightly dark and troubled atmosphere but without the nihilism that we see in so many more recent series. This is very much grown-up television that is prepared to face sometimes unpleasant realities but it doesn’t wallow needlessly in misery or sleaze. In fact the tone of this series is close to perfect.

It also has a wonderful style, very much influenced by film noir but with a kind of tough urban visual poetry to it.

This brief sampling of the second season is enough to make it clear that Naked City is one of the great American cop shows. Very highly recommended.
Posted by dfordoom at 21:16