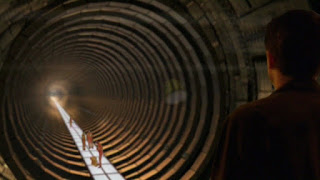 In 2002 somebody at Fox decided it would be cool to reboot Irwin Allen’s 1966 series The Time Tunnel. A pilot was made but never made it to air and that was the end of that idea. In 2006 this pilot was included as an extra in the DVD release of the 1966 Time Tunnel series.

Quite a few changes were made to the original series concept, some of the changes being positive and some being disastrous. Most of the changes were predictable. In 2002 you could not possibly have two male heroes, so Dr Tony Newman becomes female scientist Dr Toni Newman.

Another predictable change is that the reboot takes itself very very seriously. All races of fun have been banished.

The acting is a major problem. If the series takes itself very seriously these actors take themselves even more seriously. They have that amazing ability that modern actors have to be both intense and dull at the same time. The biggest problem is Andrea Roth as Dr Toni Newman. She’s so irritating that her performance on its own would have been enough to persuade me not to watch any further episodes. And she’s by no means the least obnoxious of the characters. In fact within ten minutes I decided that I hated all these people and wanted them all to die. 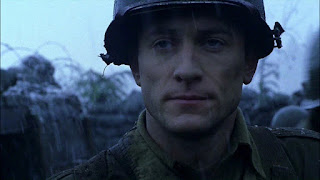 The one positive change is that the reboot does have a slightly more serious science fictional concept at its core, which is that an attempt to develop atomic fusion has unleashed a time storm that is changing both the past and the present. Only the personnel at the time tunnel complex know what the world was like before the changes occurred. It’s not an original idea and it’s not all that interesting but it is at least an idea.

In actual fact I preferred the approach of Irwin Allen’s original series, in which no matter how hard you tried you could not change history - somehow any attempt to do so would always end in failure.

Doug Phillips (David Conrad) is an ex-Marine who works for some security outfit. Now he finds himself forcibly recruited by the government for a mysterious mission. For some reason the fact that he’s a bit of an expert of the 1944 Battle of Huertgen Forest is important. He discovers that whether he likes it or not he’s now part of a team that is going to travel back to 1944 through the time tunnel to try to repair the damage done by an interloper from the year 1546.

It’s now that one of the worst features of the reboot becomes apparent. The time travellers are going to disguise themselves as 1944 American soldiers. The problem is that two members of the team are female. It’s been made clear that the number one priority is not to change anything or interact with anyone unnecessarily. It’s vital not to attract attention. Having two women dressed up as  soldiers is obviously going to make it absolutely impossible to blend in. Trying to shoehorn political correctness into the world of 1944 effectively destroys any semblance of believability. 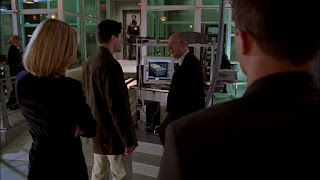 There is one single solitary attempt at humour and it’s feeble and it’s out of place.

Visually it’s very disappointing. It looks like a bad video game. The special effects look more modern than those in the 1966 series but that doesn’t mean they look better. In fact the effects are very unimaginative and uninteresting. The time tunnel complex is boring and looks cheap and shoddy compared to that in the Irwin Allen series. There’s no real sense of style. Whatever else you may say of Irwin Allen his series always had style.

This is a reboot that was doomed from the start. A series needs characters that the audience can care about. Nobody is going to care about these walking clichés. A science fiction series needs to have some kind of visual signature. This pilot looks like a TV car commercial. There is an idea here with some potential but time travel is a concept has been pretty much done to death.

The one good thing about the 2002 version of The Time Tunnel is that it’s included as an extra in the Irwin Allen Time Tunnel DVD boxed set so I didn’t have to pay money for it. And it is an extra that I guess is worthwhile if only because it makes Irwin Allen’s 1966 series look so much better. It’s one of several interesting extras in this DVD set, the other notable one being the 1976 pilot Time Travelers which was an earlier attempt (by Irwin Allen) at a reboot. And a much more successful attempt than the 2002 effort.
Posted by dfordoom at 14:00