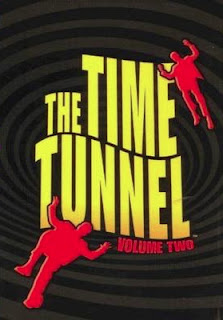 The first part of this post appeared back in April.

The Time Tunnel was released on DVD in two half-series sets (and later as a complete series set). The second half-season set opens with The Revenge of Robin Hood pitching Doug and Tony into the middle of the tumultuous quarrel between King John and his barons in 1215, and Doug and Tony will have to help in an attempt to free Robin Hood from the clutches of the king. This one is kind of fun.

Visitors from Beyond the Stars propels Doug and Tony into the past but with a futuristic touch. They’re caught up in an attempted alien invasion of a small town in Arizona in 1885. The silver-skinned aliens with their robotic speech patterns might seem silly but they’re really mean. They want protein. Lots of protein. In fact they want all of the Earth’s protein. They intend to leave nothing living behind them.

Meanwhile General Kirk, back at the time tunnel control centre, is getting very excited by UFOs. This was 1967 and the UFO craze was still a huge thing.

And just to make sure there’s sufficient mayhem, the local Apaches are about to launch a large-scale raid on the town.

The goofy silver makeup and the kitschy spaceship are major highlights. I couldn’t help liking this one despite its very high silliness content.

Kill Two by Two drops Doug and Tony onto a tiny Pacific atoll, which is not very far from a slightly larger atoll called Iwo Jima. It’s February 1945 and things are about to get rather hot and our time travellers are going to be in the middle of an extremely fierce battle. But they have more immediate problems to worry about - they have to fight their own private little war with two Japanese soldiers who are the only troops left on their tiny island.

This is a tense episode but it also has some emotional depth. There are questions of honour and it turns out that there are worse things than death, like forgetting who you are. One of the best episodes of the series.

The Ghost of Nero is an oddity. Our time travellers have landed in the middle of the First World War, on the Italian Front in 1915. They’re in a villa belonging to an Italian nobleman who claims to be a descendant of Galba, emperor of Rome (very briefly) after the overthrow and death of Nero. The Germans are planning to use the villa as an artillery observation post. The German officer in charge is played as a typical cruel sadistic thug and things are looking grim for Doug and Tony and for Count Galba. 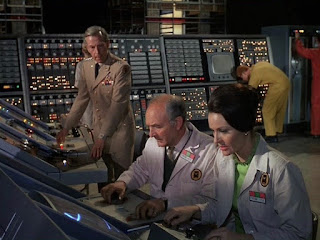 This is all rather strange. In 1915 Italy was not even at war with Germany (although the Italians were at war with Germany’s Austro-Hungarian allies). I get the impression that the scriptwriter also assumed that the Germans in the First World War were pretty much the same as the Nazis.

But that’s not the end of the strangeness, since Nero’s ghost is stalking the villa, in fulfilment of Nero’s dying curse. His ghost is there since Nero’s tomb is in the basement of the villa. The fact that the historical bits about Nero (and all the historical bits in this episode) are not exactly historical and are in fact pretty much fantasy is a bit of a worry since The Time Tunnel is a series that usually tries not to depart too outrageously from history. And it’s also a series that at least pretends to be true science fiction with no fantasy or supernatural elements. The appearance of a ghost is therefore very disconcerting.

And there’s also a guest appearance by Mussolini! This episode is totally insane. Is it insane in a good way or a bad way? I’m still not really sure. All I can say for certain is that scriptwriter Leonard Stadd really really hates Germans.

The Walls of Jericho is, as the title suggests, a Bible story. Giving a science fictional treatment to Scripture was perhaps a little risky back in 1967 but it manages to be quite respectful without being too stridently preachy. It’s an episode that couldn’t be done at all today since it comes down firmly on the side of faith. It’s quite cleverly done, with Doug and Tony finding themselves cast as the two spies sent by Joshua to infiltrate Jericho. This is one episode where the sudden appearance of oddly dressed strangers who claim to be from another time doesn’t actually surprise anybody. The Israelites assume they’re messengers of the Lord while in Jericho it’s assumed that they’re sorcerers.

It’s a story that could easily have come to grief but it’s more successful than you might anticipate. Full credit must go to James Darren and Robert Colbert, and also to Whit Bissell, who express a quite sense of belief without making an embarrassing song and dance about it. Myrna Fahey is good as the harlot Rahab who shelters the two presumed spies and Australian actor Michael Pate has fun as the hardbitten lecherous captain of the guard in Jericho.

Idol of Death lands Doug and Tony in Mexico in 1519 where the conquistador Cortes is searching for a golden mask sacred to the local Indians. Possession of the mask will make his conquest that much easier. Doug and Tony however team up with a young Indian chief to thwart the wicked Spaniards. Fairly entertaining. 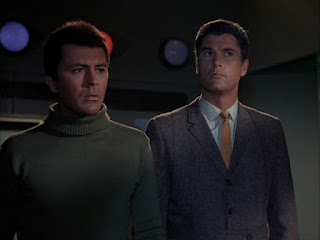 Billy the Kid obviously lands Doug and Tony in New Mexico during Billy the KId’s short but busy career as an outlaw. This is one of those episodes that centres around the central truth of time travel (as far as The Time Tunnel is concerned) that history cannot be altered. So Doug cannot kill Billy the Kid, even though that’s what he has just done. On the other hand Billy the Kid can certainly kill Doug or Tony without altering history.

In Pirates of Deadman's Island Doug and Tony fall into the hands of pirates in 1805, just as a United States Navy squadron under Stephen Decatur is about to attack the Barbary pirates. The pirates also have in their hands the nephew of the King of Spain. The Barbary Wars represent a colourful and somewhat neglected episode in American history, which happens to make a pretty good basis for a Time Tunnel adventure. The episode is a bit corny and contrived but it’s a pirate tale so that just adds to the fun.

Chase Through Time is one of the episodes in which the time travellers travel forward rather than backward in time. In fact they land a million years in the future, in a human society modelled on bees. There’s also the added difficulty that a spy in the present day has planted a nuclear bomb in the time tunnel complex and has escaped into the future as well. Doug and Tony have to chase him across a million years of time to force him to reveal the location of the bomb. If the bomb goes off they will never get back to their own time. This story tries hard for breathless excitement and it succeeds reasonably well.

The Death Merchant is an attempt to get clever, with an extra unauthorised time traveller tagging along. A kind of stowaway in time. The stowaway is Niccòlo Machiavelli. The evilest man who ever lived! Which is of course grossly unfair to poor old Machiavelli. In any case somehow or other the Time Tunnel has accidentally plucked Machiavelli from sixteenth century Italy and dropped him onto the battlefield of Gettysburg in 1863. Where he proceeds to wreak havoc, and it’s not easy for Doug and Tony to stop him since Tony got a blow on the head and now he thinks he’s a Confederate officer and he thinks Doug is a damned Yankee. Machiavelli’s presence has also overloaded the Time Tunnel. So this is an episode with a lot going on and it actually doesn’t work too badly. It’s actually thoroughly enjoyable.

Attack of the Barbarians lands Doug and Tony in another fine mess, right in the middle of Genghiz Khan’s Mongol hordes. Well actually Genghiz Khan is now dead which sort of makes things worse since there’s now a war between his successor, Kublai Khan, and his grandson Batu. Doug and Tony throw in their lot with Kublai Khan’s great general Marco Polo. Tony also finds time to fall in love with Kublai Khan’s daughter. This episode is notable for Dr Ann MacGregor (Lee Meriwether) losing her grip completely and deciding that Tony should be left in the thirteenth century because he had found True Love. John Saxon gets a more straightforwardly heroic role than usual as Marco Polo. Marco Polo’s forces are heavily outnumbered. If only they had some gunpowder! It’s a reasonably fun episode.

In Merlin the Magician Doug and Tony help to launch the career of a young English king named Arthur Pendragon. They fight Vikings on his behalf and they play a part in introducing him to a young lady named Guinevere. The main problem here is that the guest stars don’t quite have the stature or the presence to convince as larger-than-life characters like King Arthur or Merlin. 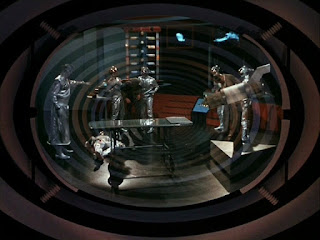 In The Kidnappers a time traveller from the future kidnaps one of the Time Tunnel’s key personnel - Dr Ann MacGregor. General Kirk takes a gamble, sending Doug and Tony to the same future time to which Dr MacGregor has been taken. They find a highly advanced civilisation several thousands years in the future. A highly advanced civilisation, but perhaps not a very humane one.

Raiders from Outer Space is very silly. Doug and Tony find themselves in the middle of a war between the British and the followers of the Mahdi in the Sudan in 1883 but there is a third party involved as well - aliens who are trying to destroy the Earth as part of a game. There’s some outrageous hammy acting from the guest cast, and some truly atrocious alien make-up effects. On the other hand there’s lots of action and it has a certain 1950s Z-grade sci-fi movie charm.

In Town of Terror it is 1978 in Cliffport Maine and alien invaders are about to steal all the Earth’s oxygen. This is another episode weakened by very poor makeup effects. The liens have also taken over the townspeople, which could have given the story an Invasion of the Body Snatchers vibe. Unfortunately it doesn’t quite work since that would require some uncertainty about who is an alien and who isn’t, and that’s all too obvious. Not a really successful episode.

Overall The Time Tunnel is a rather underrated series. It’s no sillier than the average television science fiction series and it at least handles time travel in a slightly more sophisticated manner than Doctor Who. It’s an uneven series and it seemed to go into a bit of a decline towards the end but there are some very decent and very entertaining stories and it has its moments of cleverness.

Irwin Allen often gets unfairly blamed for the problems that afflicted his sci-fi series when in fact the problems were mostly caused by the insistence of the networks on dumbing down science fiction series at every opportunity.

And while Irwin Allen’s series do have their problems they do at least mostly avoid the preachiness that makes so many episodes of other series such as Star Trek and The Twilight Zone such heavy going.

The complete series DVD boxed set includes some fairly interesting extras so it’s well worth getting.

The Time Tunnel is silly at times but it’s fine entertainment. Recommended.
Posted by dfordoom at 05:44