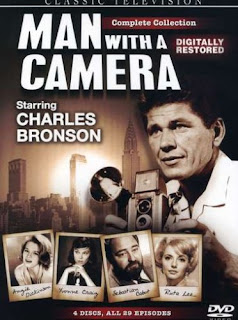 Man with a Camera is a half-hour crime series that ran on the American ABC network from 1958 to 1960. In those days a typical season comprised at least 30 and often as many as 39 episodes. There were however only two shortened seasons of Man with a Camera with a total of 29 episodes being made.

This series gave Charles Bronson his first starring role. Bronson plays photographer Mike Kovac. Of course a series about a photographer going around taking photos wouldn’t be all that exciting. Obviously he has to get mixed up in crimes and other dangerous activities. But at the same time photography has to be a key element on those crime stories. Man with a Camera manages to do these things fairly well and it makes an interesting variation on the usual private eye series. Kovac spends so much time unravelling crimes that he might as well be a private eye.

Bronson already has his screen persona pretty well set. He’s a tough guy with a rather forbidding manner but there’s also a surprising degree of rough charm. Bronson could adapt this persona for playing heroes or villains. In this case he is obviously very much a hero.

Second Avenue Assassin reunites Mike Kovac with an old friend, but the reunion does not go smoothly. Joey Savoyan is a boxer and within the next few days he’s going to get his shot at the title but he’s earning himself an unsavoury reputation. In fact there’s something sinister going on at Joey’s training camp and only a photographer can hope to uncover the truth. Not a bad way to start the series. It establishes that Kovac is very tough, very stubborn, rather impulsive and completely honest.

In The Warning Mike is manipulated into photographing a murder. And then the police manipulate him into being bait for a trap, something that makes him very unhappy. A solid enough story. 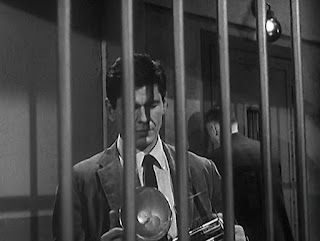 Profile of a Killer is bizarre but intriguing. Kovac gets kidnapped by an armed robber who wants him to take his publicity photos. This young hoodlum is totally looney tunes and his ambition is to be famous, even if he’s only famous as a killer. This is a fine example of the clever way this series uses the photography angle and there’s another great example at the climax. A strange one, but on the whole this is an excellent episode.

Closeup on Violence is quite clever. Kovac is taking pictures at a fire only he’s more interested in the spectators than the fire. He takes a picture of a very striking girl (she’s very striking because she’s played by Angie Dickinson) and then his camera gets stolen. It’s something to do with that girl, and with a bunch of young hoods only there’s no obvious connection between these cheap punks and such a classy young woman. The makeshift composite photo idea is cute. A very good episode.

In Turntable Mike gets mixed up in a battle between a crooked gambling house operator and a crusading politician. It all hinges on some very innocuous photos Mike took, and the far from innocuous composite photos someone else made from them. Another solid episode.

In Double Negative a murdered woman is still alive and Mike has the photo to prove it and to save a man from being convicted for her murder. Photos can be faked but Mike took the picture himself so he knows it’s genuine. And yet something doesn’t add up. A pretty good story.

Another Barrier is presumably an attempt to do something slightly different. It’s a non-crime story in which photography plays only a very peripheral part. I prefer the crime/photography oriented episodes but this is an OK story about a test pilot. 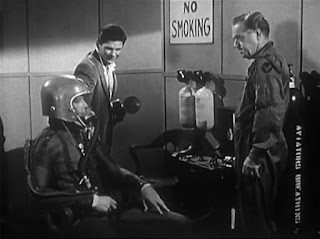 Blind Spot has Mike doing his own private investigation into the death of a fellow press photographer and old friend. It appears that the friend was involved in some shady activities but Mike can’t bring himself to believe it. Not a bad story and the hidden camera (which the viewer knows about from the start) is quite nifty.

Two Strings of Pearls sees Kovac taking photographs at a garden party. The hostess is a charming young lady with whom Kovac had had a romantic entanglement but she claims that she’s never seen him before in her life. There’s some kind of con going on but Kovac just can’t see how it can possibly be worked. It doesn’t make sense. A very clever little story and very well executed.

Six Faces of Satan is a silly hysterical story about mob violence. A terrible episode Excruciatingly bad and embarrassing.

The Last Portrait demonstrates that maybe the camera can’t lie but it can certainly kill. In this case a camera is used to assassinate an Arab leader and Mike is caught in the middle and the only person who can help out of the mess is a faded movie star. A good episode.

The Face of Murder is the face of a convicted killer about to be executed. Everyone says that Bray is one of those rare criminals who is absolute evil with no redeeming qualities whatsoever. Mike Kovac isn’t so sure but he wants Bray’s picture anyway. Bray has been a loser his whole life but he’s prepared to try one more throw of the dice, which could get a bunch of other people killed, including Mike Kovac. A fairly good episode even if it tries to get a bit philosophical at the end. 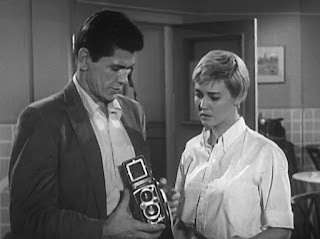 Mute Evidence is totally crazy. There’s a crazy reclusive doctor who has taught a deaf girl to talk using a camera. And there’s his crazy assistant. When the craziness leads to murder the only witness is the mute girl Susan and she can’t communicate without her camera. All Mike knows is that Susan is the key. I wouldn’t say this is a good episode but it’s fascinating in its weirdness.

In The Big Squeeze Mike gets on the wrong side of big-time gangsters by trying to help out the widow of Johnny Rico, a small-time hood who’s just had an unfortunate encounter with a guy with a machine-gun. Mike ends up with some photos that are dynamite but they’re more likely to get him killed than make him famous. The girl could get him out of this spot but she’s too busy with her own agenda of revenge. The pressure is on everybody - everybody is squeezing everybody else. A pretty decent episode to end the season.

This is a clever inventive series that deserved to be a bigger success. Bronson already shows glimpses of the qualities that would eventually make him a huge star.

The first half of the first season is particularly stronger with some very clever plots. Overall Man with a Camera is a fine series and is highly recommended.
Posted by dfordoom at 07:36