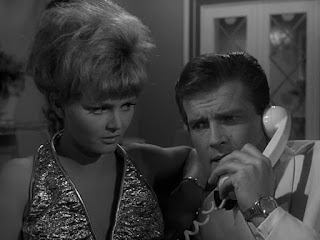 The Saint is in my view a more interesting series than it’s usually given credit for. One of the reasons it’s interesting is that the source material is so fascinating.

The Simon Templar of Leslie Charteris’s stories is unique among fictional action-adventure heroes in the extent to which he evolves over time, and the extent to which his evolution is logical and plausible. Superficially the Saint of the later adventures is still a young man but if you look at his behaviour and his outlook on life he clearly matures.

William Vivian Butler in his marvellous book on gentleman rogue action-adventure heroes identifies no less than five distinct phases through which the Saint passes.

The most intriguing is what Butler calls the Mark V Saint who made his appearance in 1949 in Saint Errant. He is clearly a very different man from the Simon Templar of the early tales but he’s also clearly a logical evolution of the young Templar. He is now older, wiser and a tiny bit sadder, and somewhat lonely. The early Saint had a collection of pals who functioned as his assistants/accomplices/partners-in-crime/disciples/followers or whatever you might like to calk them. They don’t all appear in every story but you can be sure that at least one will up up in every story. And the young Simon Templar has Patricia Holm, the Great Love of his Life, his perfect woman. All these supporting characters disappeared during the course of the 40s and by the time Saint Errant appeared the Saint was entirely alone, and remained alone.

The character in the TV series is based entirely on the Mark V Saint. Now while I would dearly have loved to see a series based on the Mark II Saint of the early 30s it could only have been done as a period piece. There were very sound reasons for choosing the Mark V Saint. What’s really cool, if you’re a fan of the books, is that the TV series captures the tone of the later Saint stories remarkably well. The TV Simon Templar has friends, but no close friends. He has women, but he doesn’t have the one woman who mattered to him. There is the subtle touch of melancholy that you find in the 1950s Saint stories and there is the slight sense of less and loneliness. Roger Moore captures these qualities in the character surprisingly well. 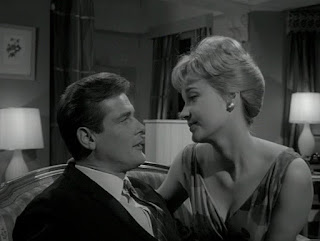 The other important thing about the Mark V Saint is that he was a man out of his time. The devil-may-care adventurer of the 1930s found himself in a world that had no place for devil-may-care adventurers. He was also a restless rootless character, a citizen of the world who was truly at home nowhere. The Saint of the TV series is definitely a man slightly out of place in the 1960s. He is dashing and debonair, but in a decidedly old-fashioned manner. He is a gentleman in a world that no longer has any respect for the code of the gentleman.

Since I’ve just finished reading Saint Errant and I’m just about to post my review at Vintage Pop Fictions and since no less than six of the nine stories in the collection were adapted for the TV series I thought it would be fun to review those adaptations.

Judith retains the Montreal setting of the original story, the first in the collection. Montreal’s richest citizen, Burt Northwade, is about to become even richer by selling an important new invention to a major car maker. There does however seem to be some dispute about whether the invention is actually Burt Northwade’s to sell. Morally it seems that the invention should belong to his brother Frank, who was actually responsible for the invention. Frank’s daughter Judith certainly thinks so and she’s planning a spot of larceny to put things right.

Judith is just the sort of woman Simon Templar likes. She’s young and beautiful and she’s criminally inclined (she is played by Julie Christie, just a couple of years away from major cinematic stardom). No self-respecting buccaneer could resist volunteering to carry out the burglary for her. Of course it’s going to turn out to be far less simple than Simon imagines. It’s a neat little story with a rather nice twist at the end.

While the story has had to be expanded a little the essentials are pretty much unchanged. And it’s one of the TV episodes that shows the Saint quite unequivocally carrying out a crime, even if it’s ultimately for a good cause. The tone of the episode matches that of Charteris’s story pretty well - lighthearted and witty. A very good episode.

Iris is an actress in a play that is about to open. The only reason the play is going to open at all is that Iris’s husband Rick has put up the money for it. Rick, being a successful gangster, has  plenty of money. Rick does however have a problem. He is being blackmailed by Simon Templar. This is news to Simon Templar. Not only is he not the blackmailer, blackmail is something of which he very strongly disapproves. He is determined to find out who the real blackmailer is. 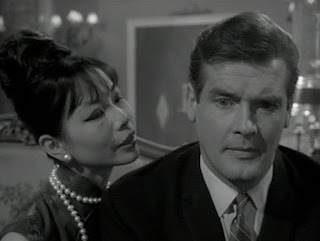 The television adaptation moves the scene of the action from Chicago to London. It also makes Rick a slightly less colourful character. Unfortunately it also makes Mr Stratford Keane, the director of the play, much less colourful. Patricia Holm is of course eliminated from the story. The Saint of the TV series has to remain a loner and cannot possibly have a full-time lady love. On the plus side Chief Inspector Claud Eustace Teal is added to the story.

Iris was not one of the better stories in the Saint Errant collection and it isn’t one of the stronger episodes of the TV series. It’s OK, but not great.

The first obvious change from the Lida short story is that the scene of the action has been moved from the Quarterdeck Club in Miami to Captain Kidd’s Club in The Bahamas. The second change is that the Saint’s long-time lady love, Patricia Holm, has disappeared from the story. The adaptation also adds some action, obviously essential for TV.

Joan Wingate is worried that her sister Lida Verity is in trouble and asks Simon Templar to help her. Unfortunately it’s too late. Lida Verity is found dead, of a gunshot wound. The universal assumption that it must have been suicide does not satisfy the Saint. Lida had a very wealthy husband. Any gambling debts incurred at the club would have been of little consequence to her. He is convinced the answer can be found at Captain Kidd’s Club.

The sequence of events has been changed a little and some extra characters added. One of them is played by the always entertaining Aubrey Morris, this time playing a more sinister character than usual. The original story has had to be expanded quite a bit but this is done very successfully. The vital plot elements are still those of Charteris’s short story and they still work. A very fine episode.

Charteris’s story Jeannine takes place in New Orleans but Terry Nation’s teleplay moves the action to Paris. A glamorous but apparently murderous female head of state, Madam Chen, owns a very very valuable pearl necklace. The police assume that the Saint will try to steal it. The Saint is most interested to find out that Madam Chen’s PR lady is none other than Judith, a beautiful but extremely larcenous young lady he has encountered before, but now she calls herself Jeannine. He assumes that Jeannine is going to try to steal the pearls and he’s right but in fact it seems like every second person in Paris is trying to steal that necklace. 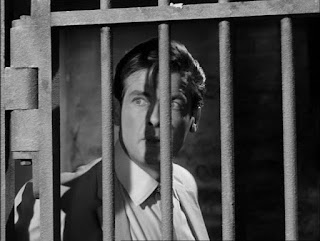 It’s unfortunate that Julie Christie was by now becoming too big a star to reprise her rôle as Judith. Sylvia Sims however does a pretty decent job. Jacqui Chan does some glorious scenery chewing as the cruel but lecherous Madam Chen.

The twist ending which Leslie Charteris pulled off so adroitly in the short story is still there in the TV adaptation and it still works but it’s not done with Charteris’s skill. The subplot involving the opposition to Madam Chen is entirely Terry Nation’s invention but it does provide an echo of Simon Templar’s motivation in the original story. It’s still a very good thoroughly enjoyable episode.

Teresa is set in Mexico, as was the original short story. Like most of the stories in Saint Errant Teresa was a fairly brief and deceptively simple short story with a clever sting in the tail. A woman, Teresa, is searching for her husband who disappeared a couple of years earlier. For TV the story had to be expanded very considerably with scriptwriter John Kruse adding a backstory in which the husband has carried out a failed assassination attempt on the President of Mexico. He’s also added a fun circus background. The extra material is effective and entertaining.

Eventually right at the end we get to the core of Charteris’s story, with Teresa and Simon Templar finding the bandit El Rojo who holds the key to the mystery.

The episode works extremely well and it’s a fine example of the successful and almost seamless integration of library footage (the circus scenes) with new material. There are a couple of dodgy process shots but for me that adds to the fun.

Luella is a tale of blackmail. The action is moved from Los Angeles in the original story to London. Big-time American banker Bill Harvey and Simon are old friends. While Bill’s wife is in Paris he decides to sample the London night-life and gets himself set up by blackmailing gang. Luella (played by the luscious Sue Lloyd) is the bait in the trap. Worse is to come when Bill’s wife finds out about his little misadventure. Somehow Simon has to come up with a scheme to get Bill off the hook, and put the blackmailers out of business. 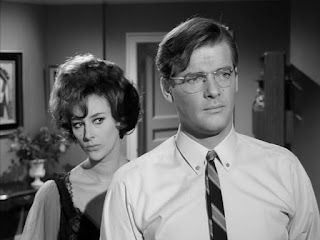 One interesting feature is that the original story specifically mentions the Saint’s practice of returning stolen or extorted money to its rightful owners, less a commission for himself. That commission is not mentioned in the TV episode - it would after all have made the Saint appear to be profiting from crime.

While a tongue-in-cheek flavour is fairly standard in this series this episode is rather startling and unusual in that it’s played as out-and-out farce (and with occasional forays into slapstick). It works more successfully than one might have expected although I’m glad it was an experiment that wasn’t tried too often.

As was the case with Lida Patricia Holm is eliminated from the story in the TV adaptation. Since she played an important part in the story the plot had to be altered so that Bill Harvey’s wife Doris becomes the Saint’s accomplice in his plan to checkmate the blackmailers.

David Hedison, who later the same year (1964) would achieve major TV stardom in Voyage to the Bottom of the Sea, guest stars as Bill Harvey and displays a totally unexpected enthusiasm for farce.

These are all fairly brief short stories which rely on having one really effective twist at the end. Leslie Charteris happened to be rather good at providing such twists. All six stories had to be expanded for television, in some cases dramatically expanded, and in general the additional material is entertaining even if it sometimes slows the pacing a little.

The more I see of this series the more I grow to like it, and the more I find myself appreciating Roger Moore’s performance. These six episodes range from fairly good to extremely good.
Posted by dfordoom at 20:57