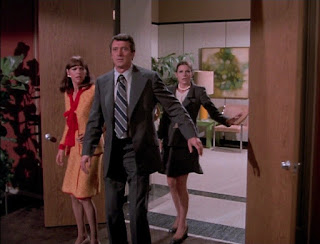 Edward D. Hoch was a prolific writer of mystery stories. While most people have never heard of him he has a very strong following among fans of classic puzzle-plot mysteries. One of his specialties was impossible crime stories, of which he wrote vast numbers. Several of Hoch’s stories were adapted for the very popular 1970s NBC mystery series McMillan and Wife. Two of Hoch’s crime stories were adapted for the third season, Freefall to Terror and The Man Without a Face.

Freefall to Terror features a spectacular impossible crime. Billy Calm (Dick Haymes) is an old friend of McMillan’s. He’s a very successful and very ruthless businessman and his methods have become steadily more ruthless. And he’s accumulated a lot of enemies. It comes as a surprise when Billy commits suicide by throwing himself out of his 17th floor office window. When Commissioner McMillan and Billy’s private secretary Maggie Miller (Barbara Feldon) burst into Billy’s office after hearing him threaten to kill himself they find the office empty. The window has been smashed. Obviously Billy has either hurled himself out of the window or he’s been pushed. The puzzler is that there is no body. No-one on the ground saw a body exit through the window. No body landed on the pavement. So is Billy dead or not?

When that question gets answered it just makes things even more puzzling and even more impossible.

The problem with locked-room and impossible crime mysteries is that the solutions do often turn out to be either excessively far-fetched and improbably contrived or wildly implausible. In this case, while the setup seems bizarre the solution is quite simple and elegant and it’s perfectly plausible. 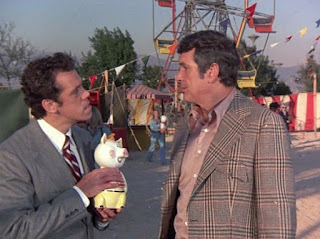 The Man Without a Face is a spy thriller story. Mac gets a very cryptic message which turns out to be from an old colleague from his intelligence days. Those days are in the distant past, or are they? Maybe the past isn’t really gone, or maybe it has left some ghosts behind. And maybe the past can still kill you.

Now there’s a murder to be investigated but not everyone wants that to happen. There are people who need to be told things and there are other people who don’t want them told. The trouble with spies is that you just can’t trust them, even when they’re on your side. In fact especially when they’re on your side. And even when a spy isn’t lying he’s likely to tell the truth in a misleading way, merely by habit.

There’s a very cool, and very complicated, dying clue in this tale.

A bonus is the carnival background to much of the action. There’s a nice scene involving peril on a ferris wheel and knife-throwing plays a important rôle as well. So there’s plenty of fun here.

This is a very complex plot with roots going back decades and with double-crosses that might go back just as far.

So two interesting Edward D. Hoch adaptations, and now for the final two episodes in this season.

Reunion in Terror is a reunion of a college football team in which Mac had played. It seems that the members of that team have suddenly started dying violently. In fact it appears that someone might be intending to kill the whole team.

But why? It’s unlikely that the murderer could be an outsider - it surely has to be a member of the team. Who else could have a motive? But what kind of motive would explain the slaughter of a whole football team?

It also seems possible that the members of the team are not being killed randomly but according to a pattern. 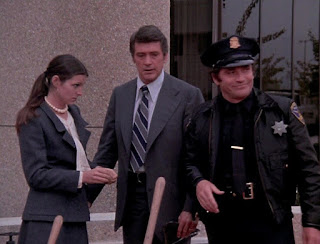 The guest cast is headlined by comic Buddy Hackett and whether you enjoy this episode will depend a lot on how well you tolerate Buddy Hackett. I can’t tolerate him at all so this episode was at times a bit of an ordeal for me. It’s also an episode in which the McMillan’s housekeeper Mildred plays a more prominent rôle than usual. I find that a little bit of Mildred goes a long way.

On the plus side Michael Ansara, one of my favourite character actors of this era, is also in the guest cast but unfortunately he’s not given enough to do.

The plot is OK with some reasonably decent misdirection.

Overall this is not one of my favourite episodes. It’s not terrible but it’s not overly interesting.

Cross & Double Cross makes use of one of the most tired and overused of all plot devices, the double. That’s bad enough, but McMillan and Wife has already used this idea in season two and with Rock Hudson playing identical dual rôles.

Commissioner McMillan has to assume the identity of his exact double, a charming hoodlum, in order to infiltrate a gold smuggling racket. Rhonda Fleming, a competent actress in her heyday, plays an ageing femme fatale who seems to be the key to the racket. McMillan gets to jump out of an aeroplane a couple of times but enough that doesn’t generate sufficient excitement to save this one.

There’s nothing wrong with Hudson’s performances in his dual rôles, it’s just that the basic idea has been done way too often and there’s nothing here to add any worthwhile original twists to the idea.

Season three really is all over the place. The first four episodes are all very good and very enjoyable but then it ends with two real turkeys. If you’re a fan of the series then the four good episodes are enough to justify picking up the season three set.
Posted by dfordoom at 05:30