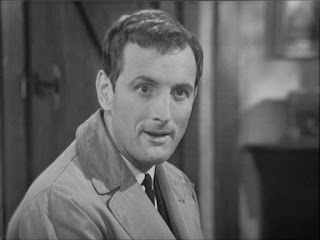 Francis Durbridge (1912-1998) was an English writer of crime thriller novels, radio plays and television plays. He wrote an enormous number of TV crime serials for the BBC between 1952 and 1980, unfortunately only about half of which survive. The later serials were broadcast under the umbrella title Francis Durbridge Presents.

A Man Called Harry Brent, which survives in its entirety (six half-hour episodes), originally went to air in 1965.

When businessman Tom Fielding is murdered it should be a really easy case for Detective Inspector Alan Milton (Gerald Harper). He has the murderer in custody and there’s not the slightest doubt that she did it. Unfortunately it’s not simple at all. He has no idea of the killer’s identity and no idea at all why she killed Fielding. And what is the connection to Harry Brent?

Harry Brent (Edward Brayshaw) is engaged to be married, to Milton’s ex-girlfriend Carol. Harry and Carol were witnesses to the murder, in a manner of speaking. So Milton is to some extent already personally involved. If Harry is involved in a deeper way, and there is evidence that could point in that direction, it could be an uncomfortable situation for the Inspector. 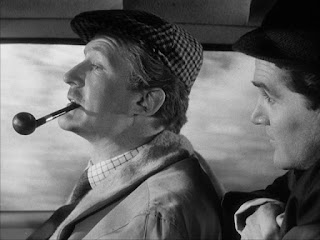 Inspector Milton can’t complain that he doesn’t have any clues to work with. There are clues in abundance. There’s the fountain pen, the cigarette pack, the sports coat, the theatre tickets, there are all sorts of snippets of conversations reported by witnesses. His problem is that he doesn’t have the remotest idea what any of these clues mean. And soon he has three corpses and they don’t help him much either.

Inspector Milton is not at all sure about Harry Brent. Lots of things about him seem suspicious, but of course it’s possible that he may have been set up. It’[s also possible that personal feelings are clouding Milton’s judgment - it’s obvious he’s still carrying a torch for Carol. Their break-up was apparently just a little messy.

Milton also thinks that this case may be a lot more complicated than it seems to be. He’s right about that, and it’s also more dangerous than it seems to be. There are people with guns involved (which in England in 1965 was a pretty big deal). Milton himself is threatened by a man with a gun. There’s also a glamorous actress and they’re always trouble. 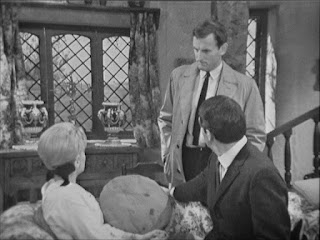 Gerald Harper plays cops in more than one of the Francis Durbridge Presents serials. Playing harassed but vaguely sympathetic cops was something he was very good at. Inspector Milton is inclined to be a little sharp-tempered at times but on the whole he’s a decent fellow faced with a very frustrating and personally difficult case.

This serial dates from the era of shot-in-the-studio shot-on-videotape British television but there’s quite a lot of location shooting as well. As a result it doesn’t have the very cheap very claustrophobic feel that so many mid-60s British TV series have. It’s still a bit static at times but that was par for the course for British TV in 1965. 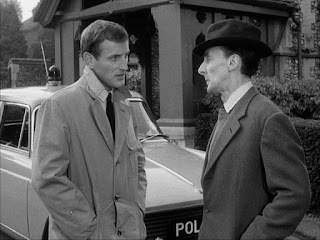 All the surviving Francis Durbridge Presents serials are available on DVD in Region 4, in two excellent-value boxed sets from Madman. Most are available in Region 2 as well. Madman’s transfer is surprisingly good for a British TV series of this vintage, especially given that apparently only a single copy survives.

A Man Called Harry Brent suffers from some of the problems that afflicted some British television at that time, being a little static, very dialogue-heavy and with a certain stiffness. It also has many of the strengths of the best of 1960s British television with some fine writing.

Some of the other Francis Durbridge serials are better but this one’s quite enjoyable. Recommended.
Posted by dfordoom at 03:41