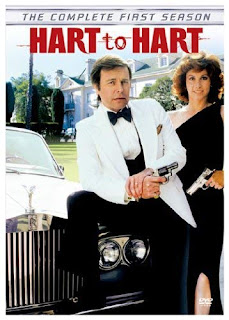 When you look at the credits for Hart to Hart and you see names like Sidney Sheldon (who created it) and Aaron Spelling (who acted as executive producer) you can be fairly sure this is not exactly going to be high art. You can also be fairly confident it’s going to be glamorous and somewhat on the trashy side. On the other hand it’s also likely to be pretty entertaining. And that’s more or less how Hart to Hart pans out. It’s all empty calories and it’s loaded with sugar but it’s enjoyable enough televisual junk food.

Jonathan Hart (Robert Wagner) is a fabulously rich good-looking tycoon who has discovered that he is so rich that he longer needs to work at it. The money will just keep on accumulating. His wife Jennifer (Stefanie Powers) is a famous good-looking writer. The Harts have only one problem. Being rich and famous and gorgeous leaves them with a lot of spare time. They fill in that spare time by playing at being amateur detectives. Luckily it turns out that rich good-looking famous people seem to have a natural talent for crime-solving.

It’s a series that doesn’t exactly place heavy demands on the acting talents of the two leads. All they’re really required to do is to look fabulous and sexy, wear expensive clothes and trade wisecracks. And of course they have to have charisma and likeability - no television series can hope to succeed unless the leads have those qualities. Wagner and Powers have no difficulty whatsoever in meeting these requirements.

Robert Wagner was already a big star on both television and the big screen and with It Takes a Thief (1968-70) he already had a hit TV series under his belt. Stefanie Powers was less of an established name although her previous credits did include the starring rôle in the ill-fated but arguably slightly underrated The Girl from U.N.C.L.E. back in 1966. 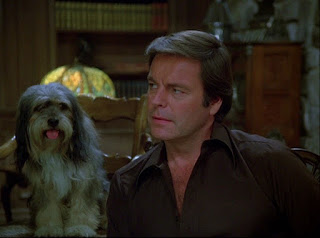 The pilot episode establishes the tone. This is not a series that we’re supposed to take very seriously. Jonathan is playing poker (which is clearly one of his passions) when he gets the news that his buddy Sam Roberts has been killed in a car crash on his way home from a health farm. Jonathan starts to get suspicious when he finds out that Sam had been seeing a psychiatrist. He becomes convinced that this was murder. He decides to check in to the health farm himself. On the way there he has a highway encounter (which ends with Jonathan’s Ferrari slamming into a police car) with an unknown woman. This woman is at the health farm as well and she and Jonathan seem to hate each other. Of course it’s no great surprise when we discover that the woman is actually Jennifer Hart and the feud between them is part of their cover story.

It’s also no surprise that the health farm turns out to be a rather unhealthy place to be. It’s run by Dr Peterson (Roddy McDowall) and Dr Fleming (Stella Stevens) and they’re both clearly sinister and slightly deranged. They’re obviously up to evilness. Naturally there will be attempts to kill both Jonathan and Jennifer, but by then the Harts are starting to figure out what’s going on. What’s going on has been pretty obvious to the audience from the start.

The main problem is that there’s not enough plot for a movie-length pilot. What plot there is is also somewhat lacking in originality and imagination. It’s carried by the star power of the two leads and by the wonderfully dotty performances of Roddy McDowall and Stella Stevens. It’s not fantastic television but it’s a harmless time-waster. 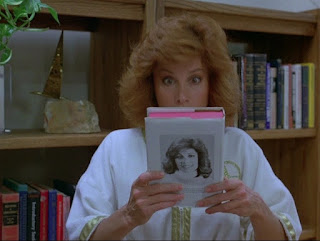 In Hit Jennifer Hart Jonathan has uncovered a racket on the waterfront and now the racketeers want to warn him off by taking out a contract on Jennifer. The send a hitman who looks and acts like the kind of guy who would have been kicked out of hitman school for being completely unsuitable material. The plot starts out being fairly predictable and then becomes wildly unconvincing as well. Not a very successful episode.

Passport to Murder is much better. Jonathan and Jennifer get mixed up in dope smuggling in Mexico. They’re trying to get an old friend out of a jam, and as a result they get arrested, chased by helicopters and hunted down by crooked cops.  This one is much better paced than the earlier episodes and the script has some decent twists and turns. The climactic action scene is well executed and exciting. This is a very good episode.

You Made Me Kill You is a very good episode. A young woman who works for Jonathan becomes obsessed with him. She is jealous of Jennifer Hart, and then decides she wants to be Jennifer Hart.

The Man with the Jade Eyes is one of those adventures in Chinatown/Mysterious Orient kind of stories which I’m actually quite fond of. A wooden box containing a stature is left in the back of the Harts’ car by a dying Chinese man. Before he dies he says about something about returning the man with the jade eyes to the temple. Maybe he means the statue. But the state doesn’t have jade eyes. It doesn’t seem valuable either but it soon becomes evident that here are people who will kill to get their hands on it. A fun episode. 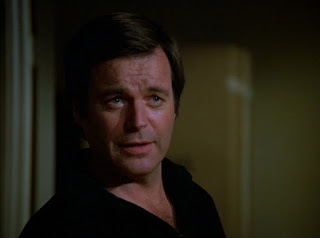 Color Jennifer Dead concerns a painter who has just completed a portrait of Jennifer Hart. The painter then promptly dies. From the start it looks mildly suspicious - he was supposed drunk and crashed his car but he wasn’t a drinker and he was a notoriously careful driver. Then a few more odd things turn up. This is typical Hart to Hart. The plot is very thin but there’s plenty of glitz and glamour. It’s an OK episode.

It is a dark and stormy night when the Harts go to a dinner party at the haunted house their friends Fred and Amanda have just bought. Thus begins Night Horrors which, as you might have gathered, is even more lightweight ad tongue-in-cheek than most Hart to Hart episodes. There’s a hunt for hidden treasure, secret passageways, the lights keep going down, the telephone lines are cut. And of course there’s murder. If you love the Old Dark House movies of the 30s and 40s you might like this one. It reproduces the feel of those movies quite well. It’s fun if you’re in the mood.

Hart to Hart reminds me just a little of McMillan and Wife. Both deal with husband-and-wife crime-fighting teams. OK, Sally McMillan isn’t really even an amateur detective but she does manage to find herself in the centre of just about every major crime in San Francisco. In both cases you have scripts that are serviceable but not exactly dazzlingly original. Both series rely for their appeal on glamour and romance as much as on the mystery plots. Both series feature a loveable comic relief servant. And both rely to an extreme degree on the charisma of the two leads and on the chemistry between them. Personally I think McMillan and Wife was the better series but it’s a formula that will always work if you have the right leads (and it’s a formula that has gone on working since The Thin Man back in 1934).

I’m not sure how much further I’m going to go with this series. It’s hardly fair to judge it on just a handful of episodes but there are so many other TV series and movies that I have lined up in my viewing queue that it may be a while before I revisit Hart to Hart. So far it seems very lightweight, which is fine. It hasn’t really grabbed me.
Posted by dfordoom at 03:30