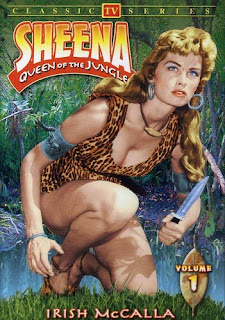 Sheena Queen of the Jungle was a 26-episode syndicated television series dating from 1955. It was based on the adventures of the popular comic book heroine (who made her first appearance in 1937).

Sheena is pretty much a female Tarzan. Raised in the jungle and speaking only halting English, able to communicate with the wild animals and proficient in Tarzan-like skills such as swinging through the trees.

The biggest claim to fame of the series is probably its star, the stunningly beautiful Irish McCalla. McCalla was a popular pin-up model. She admits that she got the part not because she could act but because she really could do stuff like singing from tree to tree. I imagine that her tall athletic curvacious body may have helped her a little in landing the rôle as well. In the early episodes she did all her own stunts.

I can imagine that Sheena must have been a popular lust object for teenage boys back in the ’50s. If that skirt had been half an inch shorter she’d have been arrested for public indecency.

McCalla may have been right about her lack of acting talent but she’s still awesome and she looks exactly the way a jungle girl should look. She manages to look glamorous while still looking like she’s at home in the jungle. She remains the best of the actresses to play the rôle. She might not be an actress you’d cast in a more demanding rôle but in a series like this she’s more than adequate and she has the necessary presence to make it convincing that the locals respect her.

Between Sheena and her modelling work for legendary pin-up artist Alberto Vargas McCalla became something of a cult figure.

The jungle adventure genre was well established in American television by this time, with Ramar of the Jungle in the early years of the decade and then Jungle Jim (wih comet Tarzan Johnny Weismuller). With the use of plenty of stock footage they were cheap and easy to make.

While the series was made in 1955 it gives the impression of taking place in a slightly earlier era. In fact it would be more accurate to say that this is the Africa of the imagination, the Africa of late 19th century adventure tales. On the other hand, like Ramar of the Jungle, it is very sympathetic to the locals and it’s probably fair to say that it’s tying to be respectful towards them. Of course by today’s standards it would still be considered to be very politically incorrect. If you judge it, as I believe you should, by the standards of its own time it’s quite enlightened. 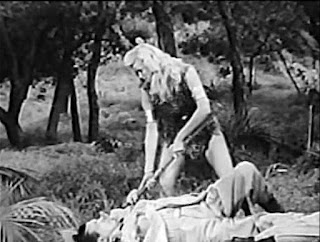 If you compare this series to Ramar of the Jungle then the main thing that makes Sheena Queen of the Jungle superior is that Irish McCalla is much easier on the eyes than Jon Hall. They’re both harmless fun.

Sheena gets helps in her battles against bad guys from her friend the hunter and safe leader Bob Rayburn (Christian Drake). The nature of their relationship was not spelt out. In the comic I believe he’s her boyfriend but in the TV series they seem to be just friends, albeit fairly affectionate friends. Not very plausible perhaps but it was 1955 and since they’re obviously not married they can’t be anything but friends. Sheena gets some help from her pet chimpanzee Chim as well.

There have been several other attempts to bring Sheena to the screen, including the very expensive 1984 flop Sheena. Which is nowhere near as bad as its reputation would suggest (and while Tanya Roberts is not as good as Irish McCalla she’s also not as bad as some would have you believe). It was just a very rash move to spend so much money on a movie that was only ever going to attract a cult audience.

In The Ganyika Kid a crooked fight promoter named Regan is confronted by an African, Towando, he had plucked out of the jungle and taught every dirty trick of the fight game. Regan made lots of money out of Towando until Towando headed back to the jungle but now Towando wants revenge. Sheena and her buddy Bob don’t like Regan at all but they can’t let Towando kill him.


In The Lash Sheena stops a brutal trader from whipping a native. This is not the last she’ll see of the Whip Man. He’s actually Bull Kendall and to say he’s up to no good would be an understatement. He has a devious scheme and only Sheena can stop him. A fine episode. With a memorable and truly menacing villain. When someone tries to take a whip to Sheena that someone is likely to regret it. 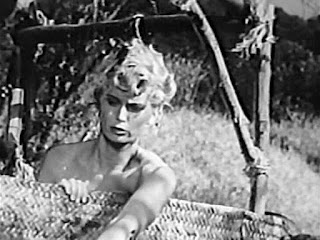 The Magic Bag is a bit thin. Bob and Sheena rescue a young runaway African named Nugu and a Swiss doctor named Becker. The doctor is looking for the secret of a native drug while Nugu has his own agenda - he wants to steal White Man’s magic so he can become a witch doctor. So Nugu and Dr Becker each have something the other wants. That sounds like the basis of a mutually advantageous trade but things get complicated. There are no actual villains in this story, just a series of misunderstandings. It’s an OK episode.

The Rival Queen starts with two guys escaping from a prison camp in Tanganyika. One is Bull Kendall, a former carnival strongman, while the other is a former carnival magician. Kendall wants to start a war between two neighbouring tribes to further a scheme he’s cooked up. He needs his wife’s help but she’s not likely to give it so the magician hypnotises her into thinking she’s The Queen of the Spirit World. The tribes will listen to her and Bull Kendall will get his war. He thinks his plan is foolproof, especially when he has Sheena captive and bound. But has he underestimated Sheena? This episode is quite a bit of fun.

Eyes of the Idol is the cleverest episode I’ve seen so far. A local tribe, usually peaceful and law-abiding, has been committing robberies. It has to do with the recently established cult of a strange idol. The nature of this idol is a very cool idea, and the witch doctor’s method of trying to eliminate Bob is ingenious. A very good episode.

In Forbidden Cargo gunrunners are supplying rifles to a rebellious tribe but they may be spreading typhoid as well as guns. Sheena and Bob must stop them from doing both these things. It’s lucky that Chim understands English so well so Sheena can send him to tell the doctor that he’s needed. He’s a very smart chimpanzee. This was the time of the Mau Mau rebellion so at the time it would have been quite topical. An entertaining enough episode. 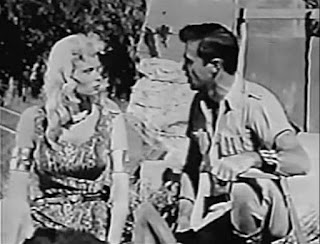 In Forbidden Land Sheena and Bob have to lead a documentary film crew into the jungle to film a tribe that has never been filmed before. Sheena assures everyone that while the  tribesmen are a bit cautious about strangers they’re basically very peaceful and friendly. Of course things go wrong, there’s a murder but who was the guilty party? Another fairly enjoyable episode. And we find out that anyone who thinks that tying Sheena up renders her helpless had better think again. It just makes her annoyed.

Secret of the Temple concerns the ageing American Dr Heller looking for the secret of eternal life. He has heard the legend of the Elders of the Temple, hidden deep within the jungle, who know this secret. Rather unwisely he’s hired a scoundrel named Lewis as a guide to take him there. Sheena and Bob will have to find Dr Heller before he gets himself into real trouble. An enjoyable episode.

The Leopard Men begins with the Africans employed as bearers by a prospector being strangely terrified by leopard footprints. Then one of the Africans is killed. Not by a leopard, but by Leopard Men. Everyone assumed the Leopard Men were a myth, but perhaps everyone was wrong. The trouble is that the prospector blames Sheena and accuses her of being a Leopard Woman. Sheena and Bob will have to find out abut these Leopard Men. This is a pretty good Sheena in Danger episode incorporating one of the major themes that have already become familiar in this series - greed driving men to do evil.

Sheena Queen of the Jungle is a kids’ adventure series. As such it’s light undemanding entertainment. And for males of just about any age it offers Irish McCalla to drool over. And who doesn’t love jungle girls? I certainly enjoyed the ten episodes I've managed to see so far. Recommended for jungle adventure fans.