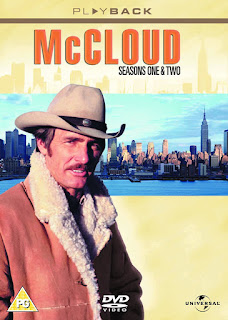 McCloud, which was made by Universal Television and ran on NBC from 1970 to 1977, is a good example of the sort of thing that American television did well at that time. It’s a relatively lightweight but quite stylish cop series with its own distinctive flavour. It’s light on violence and sleaze but strong on solid old-fashioned entertainment.

McCloud had a slightly odd early history. The first season comprised one-hour episodes but for syndication two episodes would be combined, not always smoothly, into a two-hour TV movie format with some cuts made in order to squeeze in even more commercials. The Australian DVD release preserved the original formats while the US release offered the syndicated versions. By season two the series had settled into the same TV-movie format as series such as Columbo and McMillan and Wife (with which it was rotated in NBC’s Mystery Movie wheel series).

The second season went to air in late 1971 and early 1972. It's mostly the formula as before although as the series progressed it apparently became more overtly comedic.

McCloud has a feel that is very reminiscent of classic 1930s Hollywood B-movies - it has a likeable hero, decent murder mystery plots, some comic relief and a generally fairly light-hearted tone. It’s not wildly dissimilar in tone to the Charlie Chan movies.

And like the Charlie Chan movies it features a fish-out-of-water detective hero, in this case a country bumpkin rural deputy marshal from Taos, New Mexico who finds himself working with the New York Police Department. And like Charlie Chan Sam McCloud is  easy-going and good-natured and criminals tend to underrate his abilities. In fact he has a subtle and devious mind and he’s remorseless when he’s on the trail of a wrong-doer.

Marshal Sam McCloud might be an unconventional character in some ways but he’s a pretty straightforward hero although he does make the occasional mistake. He is very much an uncomplicated good guy. He’s an engaging enough character (and Dennis Weaver’s performance is entertaining enough) to make even the lesser episodes quite watchable.

J.D. Cannon plays McCloud’s boss, Captain Clifford. Weaver and Cannon are a perfect pairing, their verbal sparring being sometimes friendly but with just enough of an edge to make things interesting. Diana Muldaur is a semi-regular as McCloud’s girlfriend Chris and she and Weaver have the right chemistry. 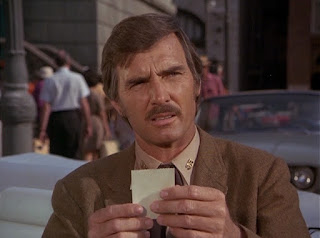 If you like your cop shows dark and gritty and with a very serious tone then forget McCloud. It mixes in a fair amount of humour, and in some episodes a very great deal of humour. This is not a series that expects to be, or wants to be, taken too seriously.

The second season is perhaps a bit more uneven than the first. It gives the impression that  the producers weren’t quite sure how far they wanted to push the lighthearted tone. And occasionally they perhaps push it a little bit too far.

Kidnapping stories are a cop show staple and it’s not easy to keep coming up with fresh twists on the theme but Peter Allan Fields’ script for Encounter with Aries manages to do so. The wife of a wealthy astrologer is kidnapped. The police don’t have to look for the kidnapper. He comes to them. But that doesn’t help them because he has the means to have the victim killed automatically.

The very strong supporting cast helps a great deal. Sebastian Cabot is great as the manic astrologer whose erratic behaviour goers the police extra headaches. Susan Strasberg as the ditzy girlfriend of the kidnapper and Louise Latham as the astrologer’s wife (just as ditzy but in a different way) add to the enjoyment. Dennis Weaver is in good form, with Sam McCloud doing the Columbo thing extremely well (you’ll understand what I mean when you watch it). As always the sparring between McCloud and Chief Clifford (J.D. Cannon) is delightful.

There’s a terrific early scene with McCloud having to deal with a crazy old guy worried about aliens bombarding him with gamma rays (the other cops always pass on the most annoying complainants to McCloud). McCloud handles the situation beautifully. The bonus is that the old guy is played by the always wonderful Elisha Cook Jr. 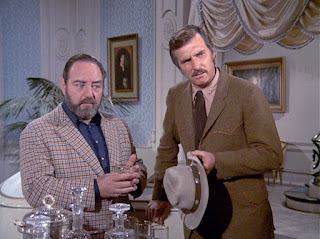 Top of the World, Ma! is the story of Bubba White (Bo Svenson), a broken-down never-was football player who’s been working for a collection agency in Dayton Ohio. He’s got the idea fixed in his head that a man named Faraday owes him money so he’s arrived in New York to get that money. Bubba’s a nice enough guy really but he’s not the sharpest knife in the drawer and he has no idea that going after a big-time criminal like Faraday might be a seriously bad idea.

McCloud gets involved in the case because he’s on the stolen car detail and Bubba is accused of stealing a car. McCloud figures that there’s a whole lot more going on here and since Chief Clifford is anxious to nail this Faraday character he decides to dig a bit deeper. A cheap photographer’s model named Jackie Dawn (Stefanie Powers) who has befriended Bubba seems like a good place to start. It’s obvious that Bubba is likely to get himself in very deep trouble and McCloud has promised Bubba’s Mom (played by Joan Blondell) that he’ll stop that from happening.

The story is routine enough but the fine supporting performances (especially by Powers and Blondell) help a good deal and Dennis Weaver is in fine form so it all works rather well.

Somebody's Out to Get Jennie gets McCloud entangled with a very crazy girl. Jennie’s boss (with whom she seems to have been in love) was killed in a helicopter crash. Jennie has this idea that he’s still alive. But Jennie is crazy so no-one is going to listen to her. McCloud has been given the thankless task of reviewing the case of the helicopter accident but the case is already all but closed. McCloud probably wouldn’t have bothered much with the case either but Jennie is so confused and frightened and McCloud is a sucker for birds with broken wings and she just gets drawn in. And McCloud has this habit of not jumping to conclusions. If a crazy girl comes up with a crazy story it might be nothing but her madness, but on the other hand even crazy people are sometimes right.

McCloud also gets a crash course in art appreciation and has a lucky escape from an over-sexed lady art critic who just loves anything western. Especially men. 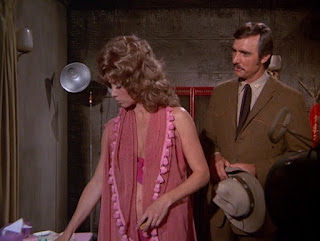 The plot isn’t startling but an engagingly over-the-top performance by Julie Sommars as Jennie helps and McCloud is just so amusing and likeable you can’t help enjoying this one.

In The Disposal Man McCloud gets a tip-off that there’s a contract out on tycoon Arthur Yerby. McCloud figures that if you have to catch a hit-man (a disposal man) it would be helpful to talk to another hit-man, to find out out how they operate. So he does. And he picks up one extremely interesting pointer.

Of course it also helps to know who would be likely to hire someone to kill Arthur Yerby. Yerby is the kind of man who isn’t well liked and the more people know him the less they like him, so it seems possible that the killer could have been hired by someone very close to him.

It’s a serviceable plot with some reasonably effective suspense. The art gallery action finale is done well. And it provides another opportunity for mocking modernist art and that’s always good to see.

A Little Plot at Tranquil Valley maybe tries too hard to be whimsical and tongue-in-cheek. McCloud happens to be on the scene shortly after an armed robbery at a pharmaceutical supplies warehouse and he captures the world’s most incompetent armed robber. He later manages to get himself captured by slightly less incompetent robbers. The actual plot is very routine. This episode tries to compensate for this with some colourful and bizarre moments, and partially succeeds. The scenes in the Tranquil Valley Funeral Home are amusing (you gotta love that a funeral home not only has conducted tours but has a sexy tour guide) and the two eccentric thugs who capture McCloud have their funny moments. The bumbling robber Ralphie is a bit overdone. Burgess Meredith goes a bit overboard also as the funeral home director who is also a criminal mastermind. 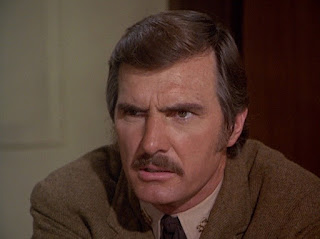 In Fifth Man in a String Quartet McCloud arrests a young violinist suspected of murdering his teacher, a famed violin virtuoso. What worries McCloud is that the young man loves his violin more than anything in the world, so why would he take it with him to commit a murder? To McCloud it doesn’t add up. So who did kill the maestro? Unfortunately we already know the answer and so plot-wise it’s all a bit predictable. It’s redeemed by Neville Brand’s performance as a gangster turned politician. His whole little ménage is delightfully amusing, with his collection of girlfriends and hookers and particularly his maid in her ridiculously sexy uniform which leaves few of her charms to the imagination. The action scenes are also well done. It demonstrates that a barely adequate story can be extremely entertaining if it’s sufficiently well executed.

In Give My Regrets to Broadway McCloud swaps shifts with another detective, Charlie Harrington. Harrington gets gunned down working McCloud’s shift and McCloud naturally blames himself. The question is, did the killer just pick a random cop to shoot or was he deliberately targeting Charlie or maybe deliberately targeting McCloud? Sam gets curious about the fact that Charlie’s singer-actress daughter has just landed a major rôle in a big Broadway production. It seems like she doesn’t have anywhere near enough experience to land such a plum rôle. Of course he’s still not sure that Charlie really was deliberately targeted but odd little things like this get under Sam’s skin. He might be just a rural marshal but he has all the instincts of a born detective and he notices trivial details.

This one does feel a bit padded. We get no less than three musical numbers (and not just snippets but whole songs). Two are Broadway big production numbers, while the third is a country song and it’s sung by Dennis Weaver.

The plot here is less than dazzling but there are compensations. There’s some very amusing (and at times rather risqué) dialogue. There’s Milton Berle as a Broadway producer, playing it very straight and doing a very fine job of it (although his rant at the theatre to his incompetent cast is clever and amusing). There’s some delightful banter between McCloud and the wealthy middle-aged but glamorous and definitely man-eating Louise Blanchard (played by Barbara Rush). So the episode still manages plenty of entertainment value.

Season two of McCloud gets off to a great start and then falters a little but it’s still thoroughly enjoyable. And it has undeniable charm. Recommended.
Posted by dfordoom at 07:42