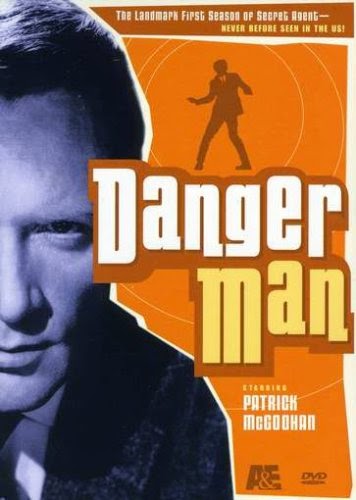 In the 1950s Lew Grade’s ITC Entertainment had enjoyed great success with their various historical adventure TV series. By the beginning of the 60s that formula was starting to wear a bit thin. Danger Man, which premiered in 1960, came along at exactly the right moment. Danger Man was the first of the classic 1960s TV spy series and proved to be both highly successful and immensely influential.

The series appeared two years before the first of the Bond movies so it has some claims to have been the starting point for the whole 1960s spy craze.

The series had an odd production history. 39 half-hour episodes were broadcast in 1960 and 1961. Despite its popularity there was then a three-year hiatus. The series was then revived and 47 one-hour episodes went to air between 1964 and 1967. There were significant differences between the first season and the later hour-long episodes. Although the hero is still called John Drake it’s not even entirely clear that he’s the same character. In fact the differences are sufficient in some ways to make it advisable to consider the later seasons to be a separate, albeit related, series.

The identity of the hero is an intriguing question indeed. Apart from the two incarnations of Danger Man Patrick McGoohan went on to play another spy in the cult favourite series The Prisoner. In the half-hour Danger Man series John Drake works for an unnamed international agency. He is a secret agent of indeterminate nationality. This was easy enough since McGoohan was born in the United States, raised in Ireland and lived in England and therefore had a conveniently indeterminate accent. In the revived hour-long Danger Man series he again plays a secret agent named John Drake but now he is clearly British and works for a British intelligence agency. So is he in fact the same man? And there has always been speculation that the unnamed character he played in The Prisoner was actually John Drake. So did he play three different spies, or two, or only one?

What is not  in dispute is that playing television spies proved to be a wildly successful career move for McGoohan, lifting him from obscurity and making him for a time the most highly paid actor on British television. 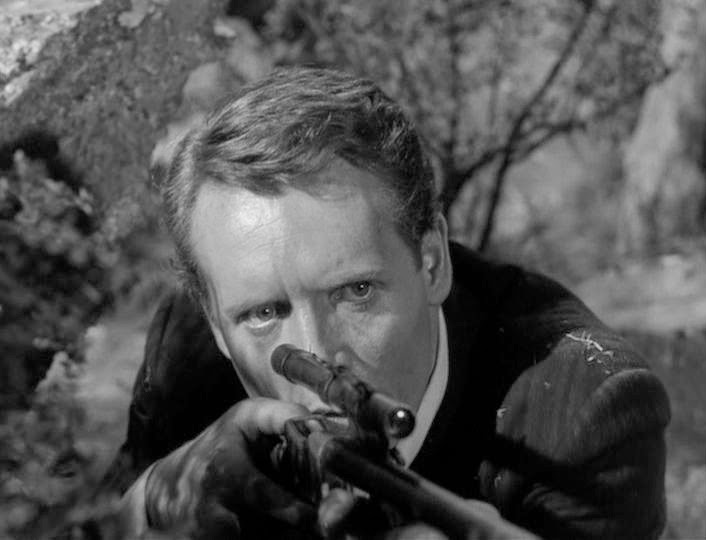 McGoohan was a man with very strong views, deeply religious and with very clearly defined moral principles. He insisted on having these views taken into consideration. He would not countenance any hint of sexual promiscuity and he insisted that the violence should be kept within very strict bounds. You might think this would have caused major problems but oddly enough it seems to have worked in the series’ favour. Since the writers could not rely on resolving everything with a climactic shootout they had to put a bit more thought into their scripts. It also gave the series a definite flavour of its own. John Drake was a complex character, not always entirely happy with the things he had to do in the line of duty.

The first season was sufficiently successful to put McGoohan into the running for the rôle of James Bond in the first of the Bond movies. McGoohan however decided that playing Bond was incompatible with his moral views. While McGoohan became a major 1960s pop culture icon the actor did not really approve of the 1960s, believing that society had begun a downward slide into moral degeneracy (and  of course he turned out to be quite correct in his assessment).

The creator and producer of Danger Man was Ralph Smart, an Australian with considerable experience producing, directing and writing for both feature films and television. Smart had worked on several earlier ITC television series and had produced The Invisible Man for them in 1959, a series that was closer to being a spy series than a science fiction series.

It was Smart and McGoohan who were primarily responsible for setting the tone of Danger Man. It was rather unusual at that time for an actor to have that sort of input but McGoohan was an unusual actor. Danger Man would also give McGoohan his first chance to try his hand at directing. 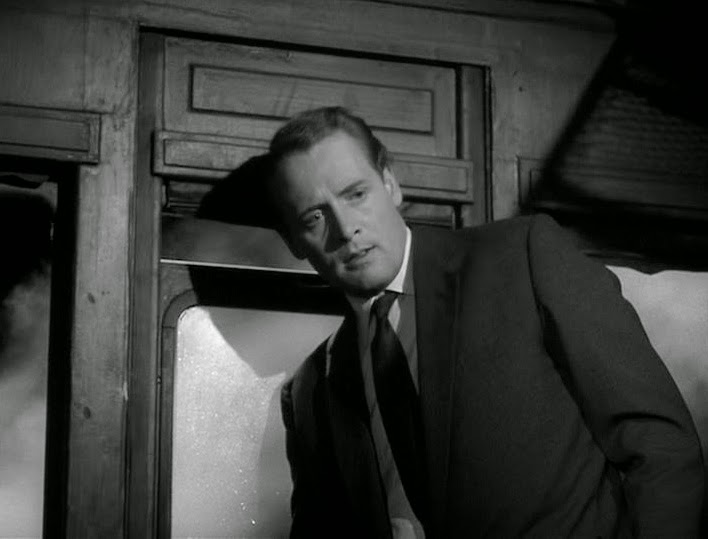 The half-hour format had its weaknesses but in the hands of competent writers it had its advantages. At its best it made for fast-moving and tightly focused television.

John Drake is a professional secret agent although at times he does a little unofficial freelancing. In the episode Position of Trust (which features a delightful guest starring performance by Donald Pleasence) Drake is acting as a vigilante to break up a drug smuggling racket.

Smart was obviously keen not to get locked into doing too many straight Cold War stories. The idea was to have plenty of variety in the settings, and plenty of variety in the bad guys Drake would come up against. There are very few Russian spies in this series. Most of the stories are set in fictional countries with Drake having to deal with corrupt, incompetent or obstructive local authorities. The series relies entirely on stock footage and a bit of atmospheric set dressing (it’s amazing what you can do with a few potted palms) to convince us that John Drake is in a different country each week. This was the standard technique of the time and generally works quite satisfactorily even if some of the accents are rather mysterious.

The Island sees Drake is escorting two prisoners, professional assassins. They cause the aircraft to crash near an island. There’s only one person living on the island, a hermit with a gun. The action takes place entirely on the island. This is one episode that entirely fails to convince us that it’s not taking place in the studio but it’s an amusing little tale.

Find and Return is one of several episodes guest starring Donald Pleasence. Drake has to bring a woman back from a Middle Eastern country to face charges of high treason. Drake does the job but finds himself feeling sorry for the woman. His sympathy for her tempts him in this case to break the rules. The Gallows Tree is another fine episode that puts John Drake once again in a situation where duty may not be entirely compatible with humanity. This is a very grown-up series that does not disguise the fact that a secret agent’s job can involve some genuine moral quandaries. 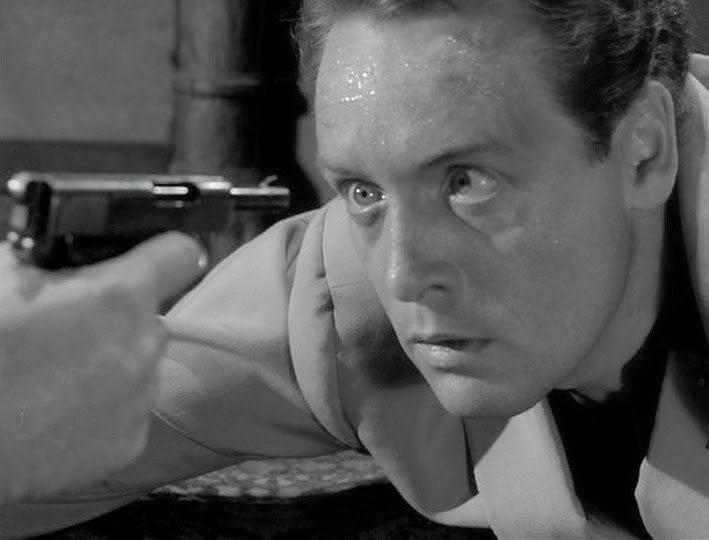 Position of Trust sees Drake acting as a lone wolf (and a bit of a vigilante) to fight drug traffickers. Quite appropriate, given Patrick McGoohan’s intense dislike of the way society was heading in the 1960s.

The Girl Who Liked GI's involves an American serviceman murdered in Germany. He’d ben working on a top-secret missile project so both the West German security services and the Americans are worried. As is NATO, who have assigned John Drake to the case. The serviceman had been dating a German girl. Was she involved in espionage? Was the American soldier a spy? Drake will find the answers.

The episode Vacation was McGoohan’s first attempt at directing and he does a solid job. Drake is just about to enjoy his first vacation for four years but an apparently innocent encounter with an American businessman on the plane changes all that. Drake finds himself taking the place of a hired killer but the identity of the target is the first puzzle. The identity of the client is the second part of the puzzle.

The Conspirators comes as something of a surprise, with quite a bit of fairly impressive location shooting - a very unusual feature for a British series of this era. The Honeymooners is one of the rare episodes that really does suffer from the half-hour format. By the time the exciting climax is set up the episode had simply run out of time. It’s a tribute to the quality of the writing for this series that such failures are so very rare.

The A&E DVD boxed set boasts fairly good transfers. Some British series of this era have not survived not in the best of condition but Danger Man is one of the lucky ones, surviving in its entirety and still looking pretty good.

Danger Man still holds up extremely well. It’s an intelligent and stylish action adventure series and it certainly deserves its iconic status. One of the absolutely essential British series of the 1960s. Very highly recommended.
Posted by dfordoom at 06:29