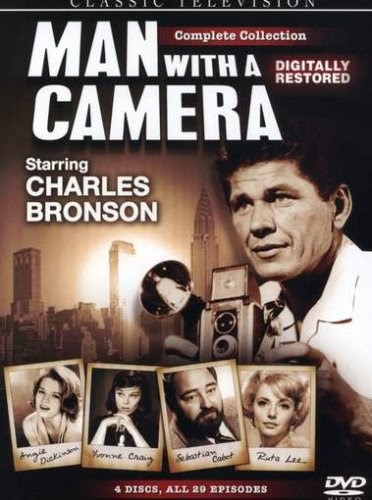 Throughout the 1950s Charles Bronson played bit parts in movies and TV series, but in 1958 the 37-year-old actor got his big break with the lead role in the American television crime series Man with a Camera. It’s slightly odd to see the legendary screen tough guy armed with nothing but a camera.

Although he plays a photographer the show is in fact a crime/adventure series. Mike Kovacs (Bronson) is a freelance news photographer who seems to spend more time acting as an amateur private eye than in taking pictures.

Two episodes of this program are included in Mill Creek’s TV Detectives DVD boxed set, and they’re the only two episodes I’ve ever seen. Judging by these episodes the series does manage to bring photography into the story lines quite cleverly and this combined with the fact that Kovacs doesn’t carry a gun gives it a distinctive flavour.

Kovacs gets mixed in uncovering the activities of international con-men and in finding the missing wife of a police detective buddy of his. And Bronson manages to get some action scenes - the climax of the second season episode Missing has Kovacs taking on a couple of hoods in a car wash, using a steam cleaner as a weapon. It’s quite an eerie and somewhat film noirish scene and it’s a definite highlight.

Worth a look if you’re a Charles Bronson fan although his later screen persona is not yet fully developed, and also worth a look if you enjoy slightly offbeat crime series.
Posted by dfordoom at 20:00