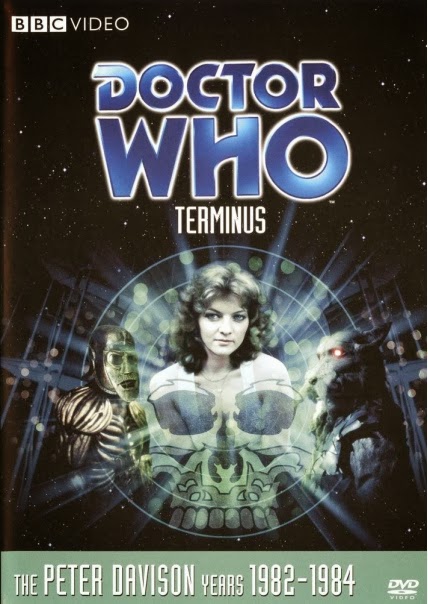 My dislike for the new Doctor Who has been so intense that for some time it has even turned me off watching the old episodes, which I used to love. I’ve finally managed to get over that (although I still detest the new series just as much). So recently I watched Terminus, the second of the so-called Black Guardian trilogy, a Fifth Doctor serial from 1983.

This is not a very highly regarded episode but it has its virtues. Its biggest problem is the problem that afflicted the series for most of Peter Davison’s run as The Doctor - too many companions. As Davison points out on the commentary track, apart from the difficulties of trying to find something for each of the companions to do the worst aspect of this was that it allowed little scope for the characters of any of his companions to be developed in any depth, and as Davison notes the saddest part of this was that Nyssa was potentially a very promising character but her potential was never developed.

The story itself has a good deal of scientific silliness (always a plus in my book) and some good ideas. Terminus is a gigantic space structure that is used as a hospital for lepers. Only it seems that this is a hospital from which no patients ever return.

Writer Steve Gallagher threw a good deal of Norse mythology into this one, with mixed but interesting results.

Turlough is still supposed to be trying to kill The Doctor but in fact he does nothing whatever of any consequence in the entire four-part serial. Tegan has even less to do. Nyssa on the other hand does actually get to do some important things and she does finally get (ironically much too late) to show some character development.

This one boasts some fairly impressive sets and some remarkably silly costumes. The Doctor and his horde of companions encounter a couple of space pirates who look like something out of an old Buck Rogers serial but with 80s hairdos. The costumes of the guards on Terminus apparently proved to be wildly impractical but they actually look rather cool. That’s also a big guy in a costume that makes him look like a huge friendly dog, much to Steve Gallagher’s disgust since his original conception of this key character was very different and would have been a lot creepier.

This is notorious as the “Nyssa drops her skirt episode” although no-one has ever satisfactorily explained why she does so. Certainly neither Sarah Sutton nor writer Gallagher had any idea why she was asked to do this. In fact it’s just one of a series of scenes in which Nyssa appears in some startlingly suggestive poses.

Terminus had a disastrous production history and director Mary Ridge, who hated the idea of doing science fiction anyway, seems to have lost control badly. The episode has a lot of pacing problems, even by the standards of 80s Doctor Who.

Despite all this the good ideas are enough to keep things reasonably interesting and Terminus really isn’t all that bad. Visually it’s actually remarkably good bearing in mind the horrendous budgetary constraints the show was made under. And it does have some pretty effective horror moments.

The commentary track gives Peter Davison the opportunity to vent many of the frustrations he felt about doing the series. It’s clear that he loved the series but was saddened by the fact that episodes like Terminus had the potential to be a lot better than they turned out. He actually makes some pretty good points and it’s one of the more interesting of the Doctor Who commentary tracks.