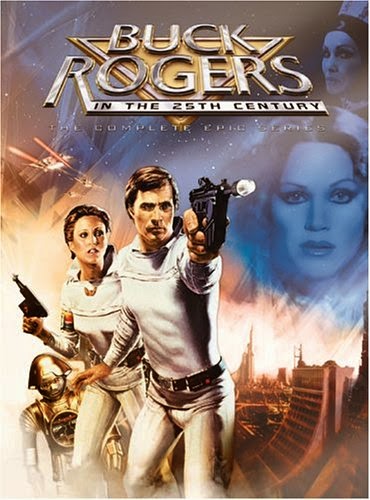 The Buck Rogers character had originally surfaced in the 1920s in Philip Francis Nolan’s novel Armageddon 2419 AD. The novel spawned both a comic strip and a 1939 movie serial as well as an early 50s TV series.

The series has little in common with any of the earlier incarnations of Buck Rogers apart from the basic idea of a 20th century American who gets accidently deep-frozen and wakes up 500 years later. In this case Buck (played by Gil Gerard) is a 1980s US astronaut. How he became deep-frozen is never properly explained but when he does awake he finds himself on board a gigantic starship. This is puzzling but he starts to get really worried when he discovers that this starship does not come from Earth. He gets really really worried when he realises he isn’t dreaming and this is actually happening.

When he gets to Earth he finds that the 25th century is very different from the world he remembers. A nuclear war in the 1990s almost destroyed the planet and the survivors now take their orders from a council of all-wise and benevolent computers. The Earth is protected by a mysterious shield that is never explained, and by fighter spaceships under the command of Lieutenant-Colonel Wilma Deering (Erin Gray) who will naturally become the love interest for the hero. 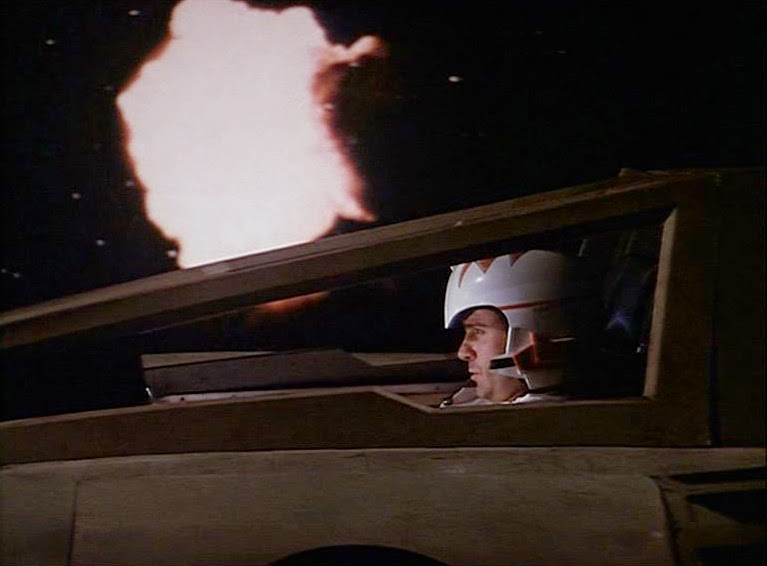 The first episode of the series proper, The Planet of the Slave Girls, was (for some obscure reason) also feature-length. As usual with episodes of a TV series extended over two episodes it has some pacing problems. It’s still, in its own way, kind of fun. The Earth in the 25th century is dependent on agricultural planets like Vistula 3. Vistula 3’s governor, played by Roddy McDowell, has allowed slavery to flourish on his planet. Now slave-dealer Kaleen (Jack Palance), who has gained a Messiah-like following, is about to lead the people of Vistula 3 in an invasion of Earth. Why a wealthy slave-dealer would want to risk everything on such a venture is never explained.

Buck Rogers and Wilma Deering must foil Kaleen’s plans and save the Earth.

This episode has most of the flaws typical of 1960 and 1970s TV sci-fi. Whole planets seem to have populations of no more than a few hundred people and the planet Vistula 3 is reminiscent of a very bad Star Trek episode, with people running around in costumes that look like they were left over from an epic movie on the Roman Empire.

Glen A. Larson seems to have been a very film believer in the virtue of two-part episodes. While they can be effective they can also tend to drag a little. Episodes 6 and 7 give us yet another two-parter, The Plot To Kill a City, involving a brotherhood of political assassins most of whom seem to have some kind of super power. 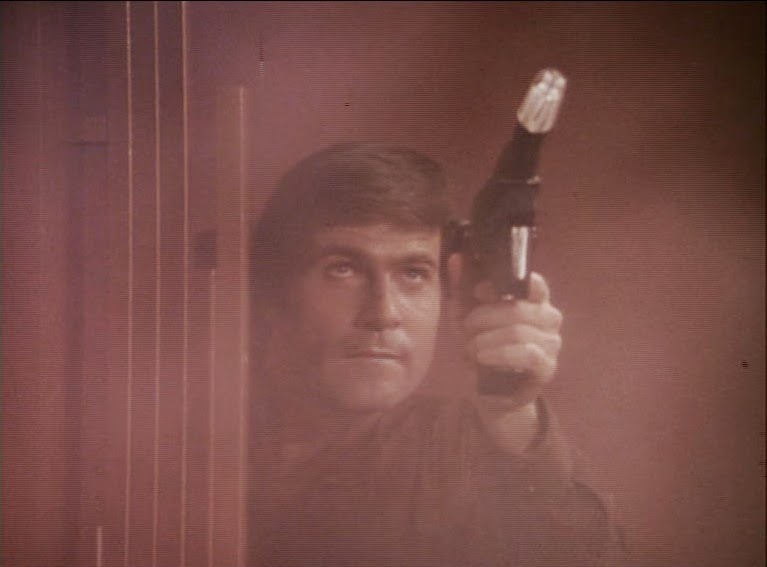 The TV series mercifully drops most of the post-nuclear war nonsense that made the original TV-movie rather more tedious than it needed to be.

Whenever it tries to take itself seriously it falls flat on its face, but luckily most of the time it is content to be silly fun entertainment and as such it works fairly well. The bits that are most reminiscent of the 1939 Buck Rogers movie serial are the bits that are most successful. A nice touch is the inclusion of 71-year-old Buster Crabbe in the supporting cast. Buster Crabbe was one of the all-time great screen action heroes and had played the part of Buck Rogers in the 1939 serial (and he’d also played Flash Gordon).

The special effects are very 1970s but for a TV series they’re generally pretty good, although there are a few very obvious and very bad matte paintings.

On the whole it’s reasonably enjoyable in a silly 70s way.

Buck Rogers in the 25th Century has been released on DVD and is readily available.
Posted by dfordoom at 06:15