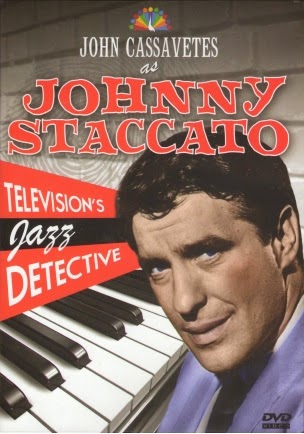 The rise of television in the late 40s and the 50s more or less killed the traditional crime B-movie. But that doesn’t mean that tough guys, two-bit punks and no-good dames disappeared. They found a new home in the new medium. The edges were softened a little but some of the TV crime series of the 50s still managed to be surprisingly gritty.

Private eye series were especially popular. Unfortunately some of the best-known examples have not yet appeared on DVD (most notably Hawaiian Eye and 77 Sunset Strip) or are only available in very poor quality public domain prints (such as the excellent Richard Diamond Private Detective starring David Janssen).

One series that is available on DVD and that is worth a look is Johnny Staccato. It only lasted for one season, airing on NBC from 1959 to 1960.

John Cassavetes plays the eponymous hero. I’ve never much cared for him as either an actor or a film-maker but he’s not bad in this show. He plays Johnny Staccato as a rather hip and rather cocky character but surprisingly he manages to avoid making him too irritating. He's a jazz musician as well as a private eye and he's very much at home in the world of late 50s Greenwich Village. He has discovered that his musical talents aren’t quite sufficient to pay the rent so he does private detective work on the side. It’s not quite clear if he actually has a private detective’s licence or if he is merely an amateur. He does carry a gun although he seldom uses it.

Johnny Staccato inhabits the world of night-clubs and jazz clubs but with a definite bohemian ambience. John Cassavetes (an actor I normally dislike intensely) does a surprisingly fine job. 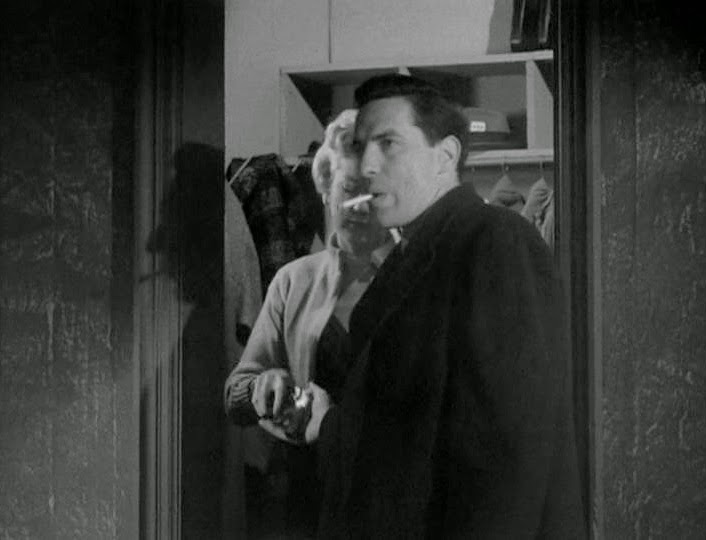 The mood of the show is a mix of film noir and late 50s jazz/beat culture cool and it works quite well. Cassavetes is not quite convincing as a tough guy but he does bring a slight edge of melancholy to the character which is quite interesting. Although mostly shot in a studio it doesn’t feel as studio-bound as many series of the era. The most effective scenes are the ones that show Johnny stalking the streets of New York at night, a slightly sad figure but determined to do his best for his various clients.

Much of the action is set in a jazz club and it’s a fascinating glimpse of a vanished era.

Some episodes really do manage to achieve a genuine film noir feel. Of course there’s a limit to what you can do in a half-hour episode but in well-written an well-crafted episodes like Tempted it succeeds surprisingly well. The Poet’s Touch is another interesting episode, dealing with the deeply unwholesome fascination that intellectuals have with violent thugs, a fascination that the literary luminaries of the beat generation were especially prone to.

The tone does become somewhat dark at times, with some stories having endings that are ambiguous or even tragic. The quality of the writing is generally quite impressive. 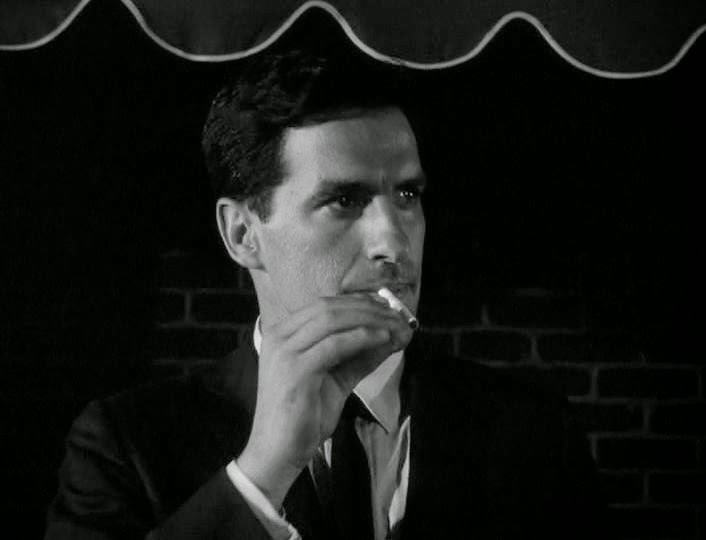 The visuals are as close as 1950s television was going to get to film noir and at times it generates a pretty effective atmosphere of glamour with an undercurrent of danger and just the faintest hint of sleaze.

Cassavetes was always ambitious to get behind the camera and this is where he first cut his teeth in that role, directing no less than five episodes.

The late 1950s was a kind of golden age for American private eye television series - Hawaiian Eye, 77 Sunset Strip, Mickey Spillane’s Mike Hammer, Peter Gunn and Richard Diamond, Private Detective all appeared at the tail end of the 50s. Mickey Spillane’s Mike Hammer was the most uncompromisingly tough and two-fisted of the bunch - it was genuinely hardboiled and overall it was the most satisfying of them all. Peter Gunn and Johnny Staccato both aimed at fusing the world of film noir with the bohemian world of jazz clubs. In my opinion Johnny Staccato does this much more convincingly and entertainingly  than the more popular but rather bland Peter Gunn. Audiences at the time obviously did not agree with me and sadly Johnny Staccato was axed after a single season.

The DVD set is not outrageously expensive and the series looks great on DVD. Johnny Staccato has its own distinctive flavour and is very definitely worth checking out. Highly recommended.
Posted by dfordoom at 06:59